Why are we here? Background and introduction – Dr Monica Spooner,

Why are we here? 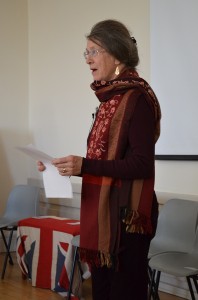 The way the Balfour Project began is very simple, but the way it is leading is anything but simple!

I hate to admit that I’ve grown up oblivious to history!

My journey of discovery began only 5 years ago, when my husband and I were invited for a holiday in Jordan, and at Aqaba we saw an exhibition of the correspondence from Sir Henry McMahon to Sharif Hussein. Our host gently explained to his ignorant guests the significance of the promise of the British High Commissioner in Cairo in 1915, that if the Arabs helped the British to defeat the Ottomans, then he, Sharif Hussein, could become king of the Arab lands.  To our shame we had never heard of McMahon or his correspondence.

From Jordan we took a bus over the King Hussein Bridge, otherwise known as the Allenby Bridge, to Jerusalem, and there began a serious journey of discovery, listening, learning and making friends – in both Israel and the Occupied  Palestinian Territories.  I shall always be grateful for these friends.

As a total non-historian, I was puzzled by the dislike, the bitterness, the anger, that the Palestinians have for the British, and that the name of ‘Balfour’ is a dirty word to them.  Today, 2nd November, Balfour Day, has traditionally been a day of a general strike amongst the Palestinians.

Mulling over these experiences back home, I began to ask, ‘How will Britain mark the Centenary of the Balfour Declaration?’  I asked endless people this question until two, who are here today, offered to work with us – and so the Balfour Project was born a year ago.

Many things have convinced us that the vast majority of British people are, like us, quite oblivious to our imperial history, and to the suffering and humiliation we caused.

In an interview in 2002 with The New Statesman, British Foreign Secretary Jack Straw observed “A lot of the problems we are having to deal with now….. are a consequence of our colonial past. …The Balfour Declaration and the contradictory assurances which were being given to Palestinians in private at the same time as they were being given to the Israelis …an interesting history for us but not an entirely honourable one.”

Can we feel any more honourable when we reflect on 400 years when Jews were thrown out of Britain, or 19th century anti-Semitism in Europe, or when we discover that Britain took a cynical and calculating decision to limit Jewish immigration into Palestine during the second world war?  Our national responsibility for turning away Jewish Holocaust refugees from the home we had promised their people is a heavy one, and is understandably a cause of deep bitterness.

In other words, both Arabs and Jews have profound reasons for believing that we British broke our promises to them.

I would ask the British people here, dare we face our past?  With so many areas of the former British Empire in serious conflict now, can we afford not to face our past? Is there anything we could, or indeed should, do to try and redeem our past?   Is there any evidence in the world that to acknowledge our history could be helpful, even healing?  What would it take for the British government and people to apologise to both Palestinians and Jews?

Recently we asked our MP, Ian Murray, about British policy towards Israel and Palestine from 1900 until today, and from a House of Commons library brief for members we have learned, among many other things that:

‘we do not hesitate to express disagreement to Israel where we feel necessary. Although we do not agree on everything, we enjoy a close and productive relationship. It is this very relationship that allows us to have the frank discussions often necessary between friends.’                    1.

But that friendship has not been always been honest and pure!    We have used, confused and betrayed those we called ‘friends’.  From now on, could we be honest and develop these frank discussions?

If we listen to the voices of history, the people of Britain will discover much dishonesty and consequent suffering that we need to atone for, and not only in the Middle East.

Our Mission Statement, printed on the back of your programme, states,

‘Mindful of Britain’s responsibility, the Balfour Project will encourage understanding of what led to the Balfour Declaration, and what flowed from it.’

We do intend that within the next five years there will be many more people understanding a great deal more about Balfour and the other contradictory promises.

We seek to contribute to justice and peace in the Middle East, and in particular to the resolution of conflict between Israelis and Palestinians.

We on the Steering Group, and I think everyone here today, keenly want to see justice, security and peace for all Israelis and Palestinians.

We have a vision, that if the people of Britain face and acknowledge the wrongs of our past, we could become more humble and honest, maybe a trustworthy nation, and we would then invite the Jews and the Palestinians to respond to us as they will, perhaps with honesty about their past!  This is a moral not a political issue.

We seek to facilitate a network of educational, political, religious and humanitarian groups who share this vision.

We can already see the beginning of a network, of a cascade of events being prepared by very different organisations, not in any way co-ordinated but with the same aim.  This is, I believe, a Kairos moment – ‘a response to a proper reading of the signs of the times.’  ‘An opportunity (that) demands a response. God offers us a new set of possibilities and we have to accept or decline.’ 2.

We hope to produce, or inspire others to produce, a wide range of multimedia resources, and to promote a series of international conferences and cultural exchanges to enable participants to engage with empathy those who have been negatively impacted by the Balfour declaration.

There will be plays and films as well as lectures and presentations, and from today’s conference I hope there will be many more initiatives. The next conference will be in April  –  details are on the website and on the table at the back of the room.

Over the next five years, as we search we will learn much, especially about honesty and humility, and will then be in a better position to acknowledge the wrongs we have committed, and hopefully to build new, true friendship with both Jews  and Arabs.  Could Britain build these relationships just because it is the right thing to do, seeking nothing in return, and might we then become known in the world as a trustworthy nation?

Who knows, an apology might bring healing and a new element in to the crucial conflict in the Middle East!

This is the Kairos moment!