Article 22 of the Covenant of the League of Nations 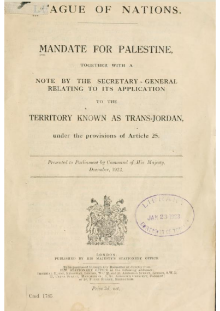 f Nations the Mandate to administer Palestine, which required her to implement the Balfour Declaration, and undertake a “sacred trust of civilisation” to advance the welfare of the Palestinian people and guide them to independence.

To those colonies and territories which as a consequence of the late war have ceased to be under the sovereignty of the States which formerly governed them and which are inhabited by peoples not yet able to stand by themselves under the strenuous conditions of the modern world, there should be applied the principle that the well-being and development of such peoples form a sacred trust of civilisation and that securities for the performance of this trust should be embodied in this Covenant.

..their existence as independent nations can be provisionally recognized….. The wishes of these communities must be a principal consideration in the selection of the Mandatory.

The best method of giving practical effect to this principle is that the tutelage of such peoples should be entrusted to advanced nations who by reason of their resources, their experience or their geographical position can best undertake this responsibility, and who are willing to accept it, and that this tutelage should be exercised by them as Mandatories on behalf of the League.

The character of the mandate must differ according to the stage of the development of the people, the geographical situation of the territory, its economic conditions and other similar circumstances.

Certain communities formerly belonging to the Turkish Empire have reached a stage of development where their existence as independent nations can be provisionally recognized subject to the rendering of administrative advice and assistance by a Mandatory until such time as they are able to stand alone. The wishes of these communities must be a principal consideration in the selection of the Mandatory.

Other peoples, especially those of Central Africa, are at such a stage that the Mandatory must be responsible for the administration of the territory under conditions which will guarantee freedom of conscience and religion, subject only to the maintenance of public order and morals, the prohibition of abuses such as the slave trade, the arms traffic and the liquor traffic, and the prevention of the establishment of fortifications or military and naval bases and of military training of the natives for other than police purposes and the defence of territory, and will also secure equal opportunities for the trade and commerce of other Members of the League.

There are territories, such as South-West Africa and certain of the South Pacific Islands, which, owing to the sparseness of their population, or their small size, or their remoteness from the centres of civilisation, or their geographical contiguity to the territory of the Mandatory, and other circumstances, can be best administered under the laws of the Mandatory as integral portions of its territory, subject to the safeguards above mentioned in the interests of the indigenous population.

In every case of mandate, the Mandatory shall render to the Council an annual report in reference to the territory committed to its charge.

The degree of authority, control, or administration to be exercised by the Mandatory shall, if not previously agreed upon by the Members of the League, be explicitly defined in each case by the Council.

A permanent Commission shall be constituted to receive and examine the annual reports of the Mandatories and to advise the Council on all matters relating to the observance of the mandates.

Britain’s historic responsibility to the people of Palestine, Gaza and Israel by John McHugo