Selfish imperial agreements between Britain and France, combined with the publication of the contradictory Balfour Declaration of 1917, fuelled hostilities in the Middle East

This article appeared in The Sunday Telegraph on 2 February 2013 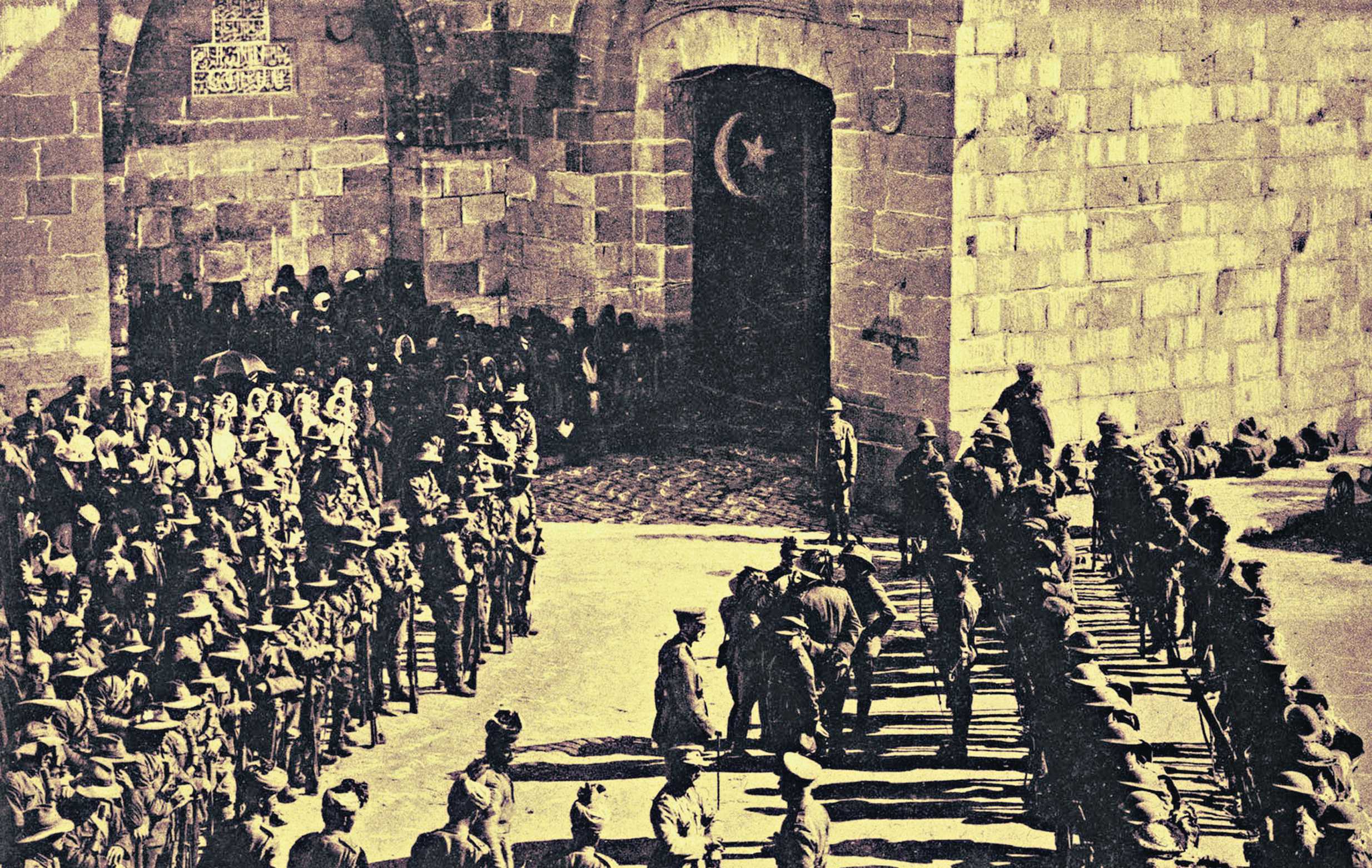 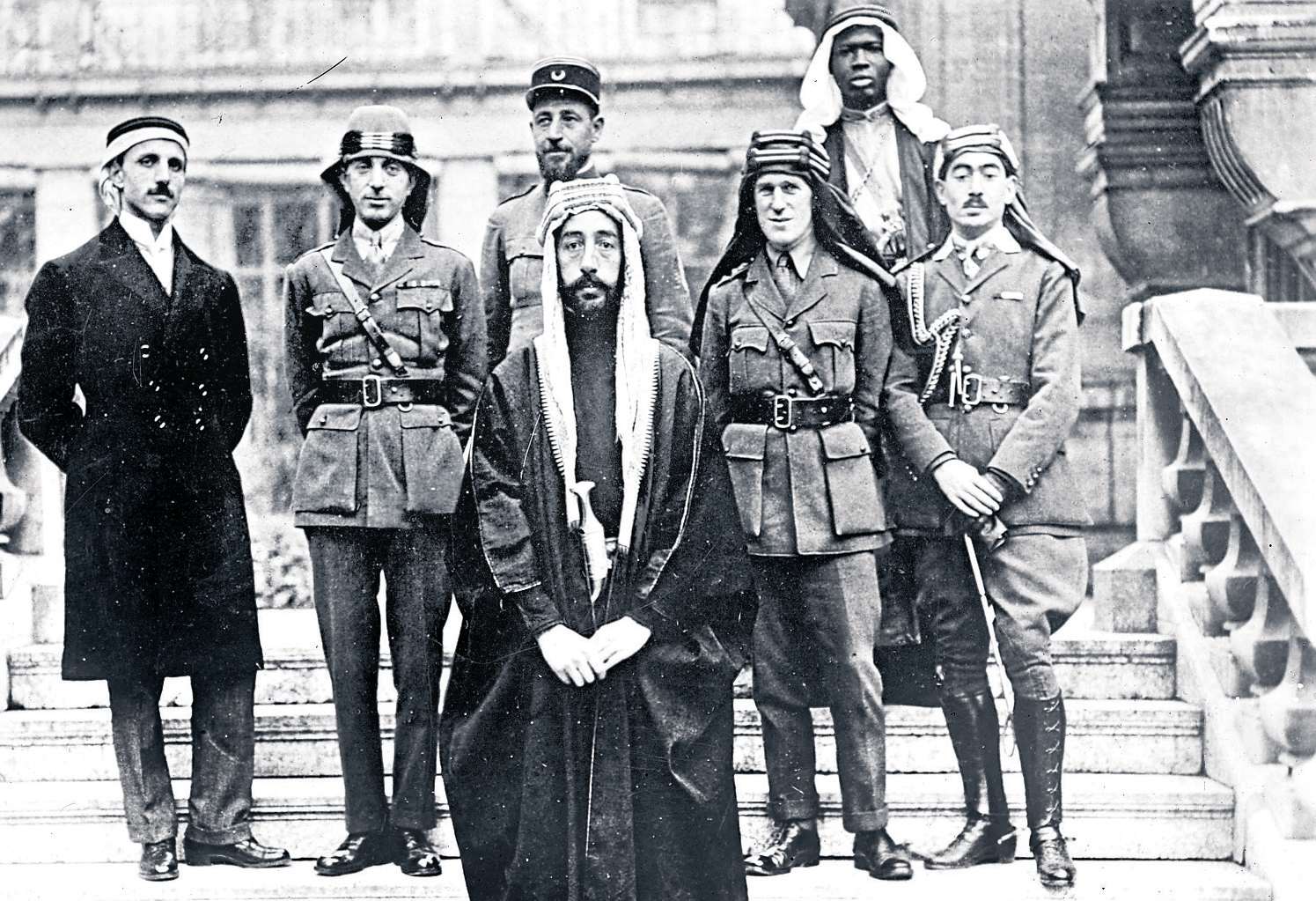 Faisal at the Peace Conference

The First World War was the most modern of conflicts. Yet the thinking of the men who directed it was often shaped by old-fashioned notions. Looming large among them was the idea that to the victor should go the spoils and that whoever came out on top might help themselves to what they fancied of the losing parties’ wealth, industrial resources and territories.

Ottoman Turkey was ‘‘the sick man of Europe’’ and in what appeared to be terminal decline when it chose to side with Germany in 1914. It was not long before Britain and France began eyeing up Ottoman domains and, in 1916, they struck a secret agreement about who would have what when Turkey was defeated.

It was, wrote historian James Barr, “a shamelessly self-interested pact, reached well after the point when a growing number of people had started to blame empire-building for the present war”. Britain would come to regret the land-grab bitterly, for it set off a conflict that, like an active volcano, would erupt intermittently down the succeeding years and even today shows no signs of cooling.

The Allies created a terrible mess in the Middle East. As well as the Israel-Palestine struggle, they bear a measure of responsibility for the inherent instability of the states that emerged from the post-war settlements. Decisions that produced the disorder were often taken hastily, heedless of long-term considerations. It soon became clear that there would be plenty of time to regret at leisure.

The deal from which much of the mischief sprang was known as the Sykes-Picot agreement. It was worked out by Sir Mark Sykes – a land-owning Yorkshire baronet and MP with a taste for the Orient – and a truculent and Anglophobe French diplomat, François Georges-Picot. Between them they split the Ottomans’ Middle Eastern empire, drawing a diagonal line in the sand that ran from the Mediterranean coast to the mountains of the Persian frontier. Territory north of this arbitrary boundary would go to France and most south of it would go to Britain.

It meant that once the Ottoman armies had been dealt with, Britain stood to take possession of Palestine. This brought several strategic advantages. Despite the agreement and the fact that they were dying alongside each other in the trenches, France and Britain maintained a fierce rivalry in the region. By securing the southern slice of the Ottoman cake, Britain would create a buffer to the east of the Suez canal, the vital economic and military short-cut to the eastern Empire, and protect it from French designs. It would also build a land bridge from the eastern Mediterranean to the petroleum fields of Iraq, a potentially bottomless source of energy for the oil-fired ships of the Royal Navy.

Possession of Palestine would put Britain in a position to grant an enormous favour to the Zionists, who were seeking to gain the backing of a great power for their dream of ending the Jews’ 2,000-year exile from Israel.

British politicians had for some time been sympathetic to Zionist aspirations. Their motivations were a mix of altruism and calculation. Men like former prime minister and now foreign secretary Arthur Balfour, who had been brought up on the Bible, believed the Jews had a right to return to the Promised Land. They also harboured the conviction that Jews exercised enormous hidden influence in the world and particularly in America and Russia. By making a promise that would gladden Zionist hearts, they might win their co-operation in achieving British war aims. After the conflict was over, it could be useful to have a Jewish entity in the region that felt it owed a debt of gratitude to the empire.

In November 1917, a document was issued in Balfour’s name that laid the foundations for modern Israel. It stated that the government “view with favour the establishment in Palestine of a national home for the Jewish people and will use their best endeavours to facilitate the achievement of this object”. The Balfour Declaration, as it became known, made no mention of the Arabs who, at the time, made up about 90 per cent of Palestine’s population. It did, however, utter the pious proviso that “nothing shall be done which may prejudice the civil and religious rights of existing non-Jewish communities”. 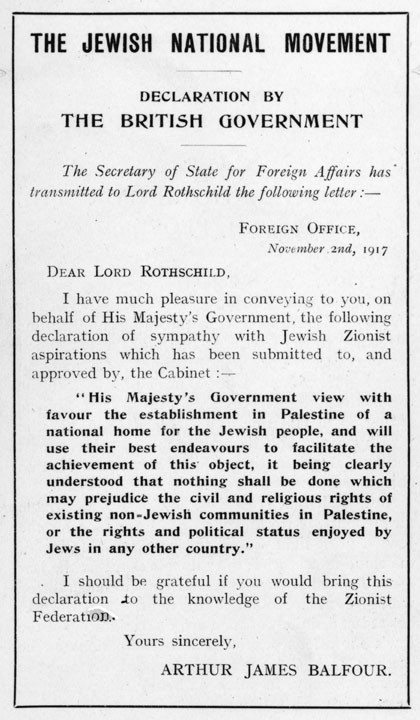 The contradictions were obvious from the outset. In fewer than 90 words, Britain had conjured up a formula guaranteed to generate endless trouble. But 1917 was a bad year, with stalemate on the Western Front, impending Russian collapse on the Eastern Front and British sea trade ravaged by the depredations of German Uboats. The Government, it seemed, was prepared to offer any undertaking that might improve the situation and the consequences could be dealt with later.

A few weeks after the declaration was published, Britain’s tenure of the Holy Land became a fact. Forces under Sir Edmund Allenby surged into southern Palestine from Egypt in the autumn of 1917. On December 11, with studied humility, he entered the castellated walls of Jerusalem’s Old City via the Jaffa Gate on foot to take the surrender. It was to be the high point in a dismal story. In subsequent years, British administrators, soldiers and policemen struggled with the impossible task of trying to reconcile Zionist aspirations to statehood with Arab resistance to what they saw as the hijacking of their homeland. 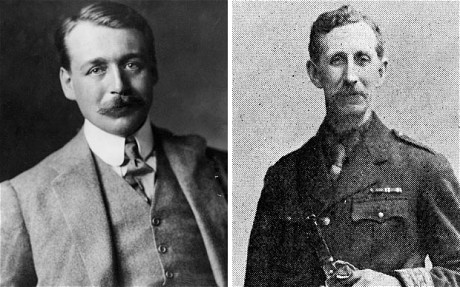 As well as offering promises to the Jews, Britain had for some time been making overtures to Arabs of the region who, for 400 years, had lived under Ottoman rule. The Turkish Sultan was the custodian of Islam’s holiest sites at Mecca, Medina and Jerusalem and, as Caliph, exercised at least a nominal authority over the world’s Muslims. On entering the war, he had called for a jihad against the British – a source of concern given there were 100 million Muslims in the British empire.

After the Gallipoli debacle of 1915 failed to knock the Turks out of the war, the danger became more acute. A Turkish counter-attack might threaten British-controlled Egypt and menace the Suez Canal. Britain now moved to encourage the Arabs to rise up against their overlords, dangling before them the prospect of freedom and self-determination in the aftermath of victory.

Their blandishments were directed at a man who regarded the Sultan as an upstart. Sharif Hussein bin Ali, 64, was the ruler of Mecca, the spiritual centre of the Muslim world and a descendant of the Prophet Mohammed. A late convert to Arab nationalism, he presented himself as the representative of the peoples of the region and embodiment of their hopes for independence.

In October 1915, Britain’s man in Egypt, Sir Henry McMahon, sent an ambiguous message to Hussein encouraging him to believe that if he joined the fight against the Turks, London would back his ambitions to create an independent Arab entity that would include the Arabian peninsula and Iraq, Syria and Palestine. Seven months later, the secret Sykes-Picot agreement granted theoretical control of much of the northern part of this area to the French.

Hussein’s revolt duly broke out in Mecca in June 1916, but swiftly fizzled out. It was then that a short, intense, fair-haired adventurer wrote himself into the lore of the region. In Jeddah in October 1916, TE Lawrence donned Arab robes and set off into the Hijaz mountains to learn what was going on. What he saw persuaded him – and subsequently his chiefs – that the Arabs were a genuinely important potential military asset against the Turks.

After bypassing Hussein in favour of his more malleable son Faisal, Lawrence then directed a classic guerrilla campaign against conventional Ottoman forces, blowing up their lifeline, the Hijaz railway, and capturing the strategically valuable port of Aqaba by a surprise attack from the rear. Late in 1918, Faisal’s army entered Damascus, a victory that local nationalists hoped would mark the start of a new era of freedom from foreign rule.

The illusion was short lived. The Sykes-Picot agreement had stated that France and Great Britain were prepared to recognise and protect an independent Arab state, or states, in their areas. But the growing assertiveness of the nationalists and the installation of Faisal as monarch in March 1920 antagonised the French.

Less than six months later, French forces crushed the independence movement and deposed Faisal. Over the next 26 years, France fought to maintain its position in the area, promoting minorities to counter the Sunni majority, in a divide-and-rule strategy. In 1926, it created a separate entity of Lebanon, splitting Syria’s historic boundaries. These divisions distorted the future development of the country and their effects are tragically apparent today.

British rule in Palestine, formalised with the grant of a League of Nations mandate in 1922, was no happier. Britain never devised a policy capable of reconciling the clashing interests of Jewish immigrants and indigenous Arabs. There were anti-Jewish riots in 1920, 1921 and 1929 that revealed the weakness of the security forces. London sent several commissions to wrestle with the conundrum it had created but no solution emerged. Instead, the administration reacted to events by appeasing one side then the other and satisfying neither.

In 1936, the Arabs rose up against British rule, an insurgency that was crushed only after three years of ruthless repression. Even before the end of the Second World War, Jewish underground groups had begun operations against their purported protectors that burgeoned into a full-scale revolt. In 1947, an exhausted Britain admitted defeat and announced it was renouncing its mandate. In May of the following year, the last Union flag was hauled down and the Arabs and Jews were left to slug it out.

Thus ended one of the empire’s greatest humiliations, “a hell-disaster” in Churchill’s despairing words. The British departed with few regrets but burning with bitterness and a feeling that history would treat them unfairly when judgment was passed on their tenure. After all, had they not done more than any other nation to realise the Jewish dream of a return to the Promised Land? It was true that Britain had started the process by which Israel was restored. But its motives were mixed and underpinned by old-fashioned imperialist thinking that had no place in the assertive new world that emerged from the 1914-1918 war.

*Patrick Bishop’s The Reckoning: Death and Intrigue in the Promised Land – A True Detective Story will be published by HarperCollins on March 17