French support for the Zionist cause in 1917

On the 4th June 1917 Jules Cambon,  wrote to Nahum Sokolow expressing French support for his project which aimed for ‘Jewish Colonisation in Palestine’ 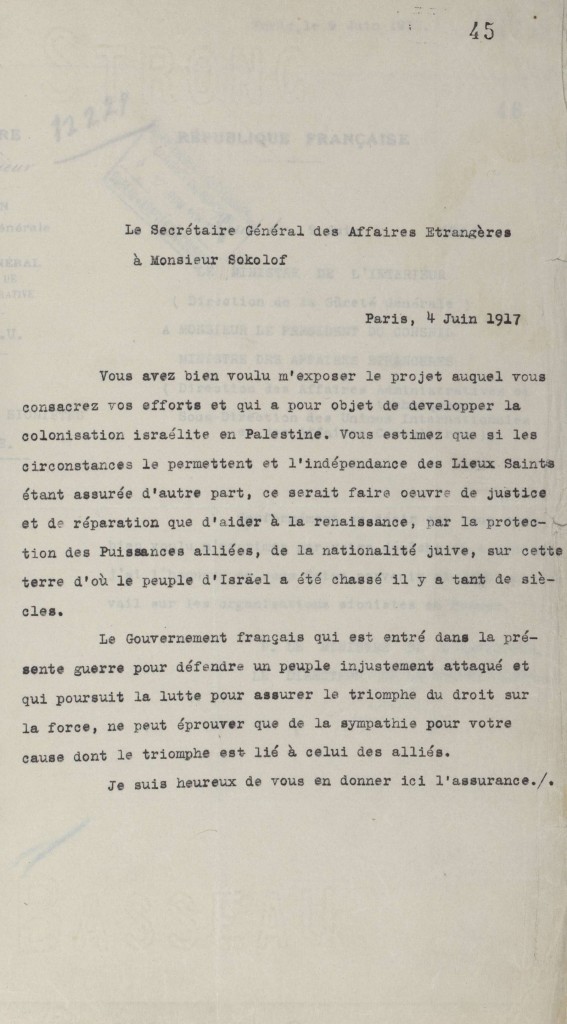 The Secretary General of Foreign Affairs

You were good enough to present the project to which you are devoting your efforts, which has for its object the development of Jewish colonization in Palestine. You consider that, circumstances permitting, and the independence of the Holy Places being safeguarded on the other hand, it would be a deed of justice and of reparation to assist, by the protection of the Allied Powers, in the renaissance of the Jewish nationality in that Land from which the people of Israel were exiled so many centuries ago.

The French Government, which entered this present war to defend a people wrongfully attacked, and which continues the struggle to assure the victory of right over might, can but feel sympathy for your cause, the triumph of which is bound up with that of the Allies.

I am happy to give you herewith such assurance.

This entry was posted in Historical, Pre-Balfour Declaration and tagged 1917, Cambon, Colonisation, French support for Zionism, Sokolow. Bookmark the permalink.