“Perfidious Albion” The British Legacy in Palestine, by Ilan Pappe 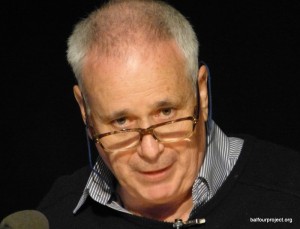 Professor Ilan Pappé’s  paper at the Balfour Project conference in October 2013, was entitled “Perfidious Albion” The British Legacy in Palestine. Many participants thought it was very inspiring.  He revealed that British involvement in the Middle East and Palestine specifically can be traced back to the explorations of the 4th century Empress Helena, mother of the Emperor Constantine, followed by the 11th century Crusaders. Then came 17th century millenarianism with the idea that “the local people are not good enough – we need new people!” All 3 elements – the will, the power and the resources – came together to get Palestine for the Jewish people. And the Balfour Declaration represented this moment as well as a continuation of British imperial policy of replacing indigenous people with others, deemed superior!

But he traced this thinking back further. Shaftesbury’s role in the rise of Christian Zionism is well-known –but not so well-known is his influence over Palmerston, his father-in-law, with whom he dined in 1840, after which Palmerston became an advocate of Jewish Restoration.  Various other key moments were highlighted, including in 1903, when historical movements from the past coalesced into a moment to facilitate a Jewish narrative of return. His thrust was that there was already powerful British support for the Jewish return before even the rise of Zionism! Weizmann’s role in facilitating the Balfour Declaration is well known. But Pappé made two more striking points. After the Balfour Declaration several key people actually visited Palestine for the first time, including Mark Sykes: the latter changed his mind completely on seeing the people of Palestine and regretted what he had written.

His final point – which was crucial – was that even in this room – and Britain in general – there was great support for the Palestinians: yet, in general, we have not succeeded with politicians and policy makers in gaining support for Palestine. Not much has changed in this respect since the 19th century.