Thatcham Festival, The role of Britain in Palestine?

What has been the historic role of Britain that has led to the present day tragic situation in Israel/Palestine? This was the theme engaged with by a very mixed group of over seventy people as part of the Thatcham Festival. The mayors of both Thatcham and Newbury were present and both spoke very appreciatively at the end of the evening.

The event was hosted by the West Berks Peace and Integration Forum. About four years ago local Muslim, evangelical and progressive (PCN) Christian, Quaker, and other friends came together to found the Forum. Beliefs differ considerably, but participants have a common heart for community building. Initiatives have varied from meetings on topics like Forgiveness, Social Conditioning, and Extremism; to ‘bring and share meals’ and a cricket match.

But on Oct 11th, being very conscious of the ongoing Israel/Palestine conflict, the theme was The Role of Britain in Palestine, 1917–1948. Over seventy people came together to see the new film about this topic and to engage with initiators of The Balfour Project towards a greater understanding. Some in the audience were very knowledgeable about this history. But for most the evening was a real eye-opener. 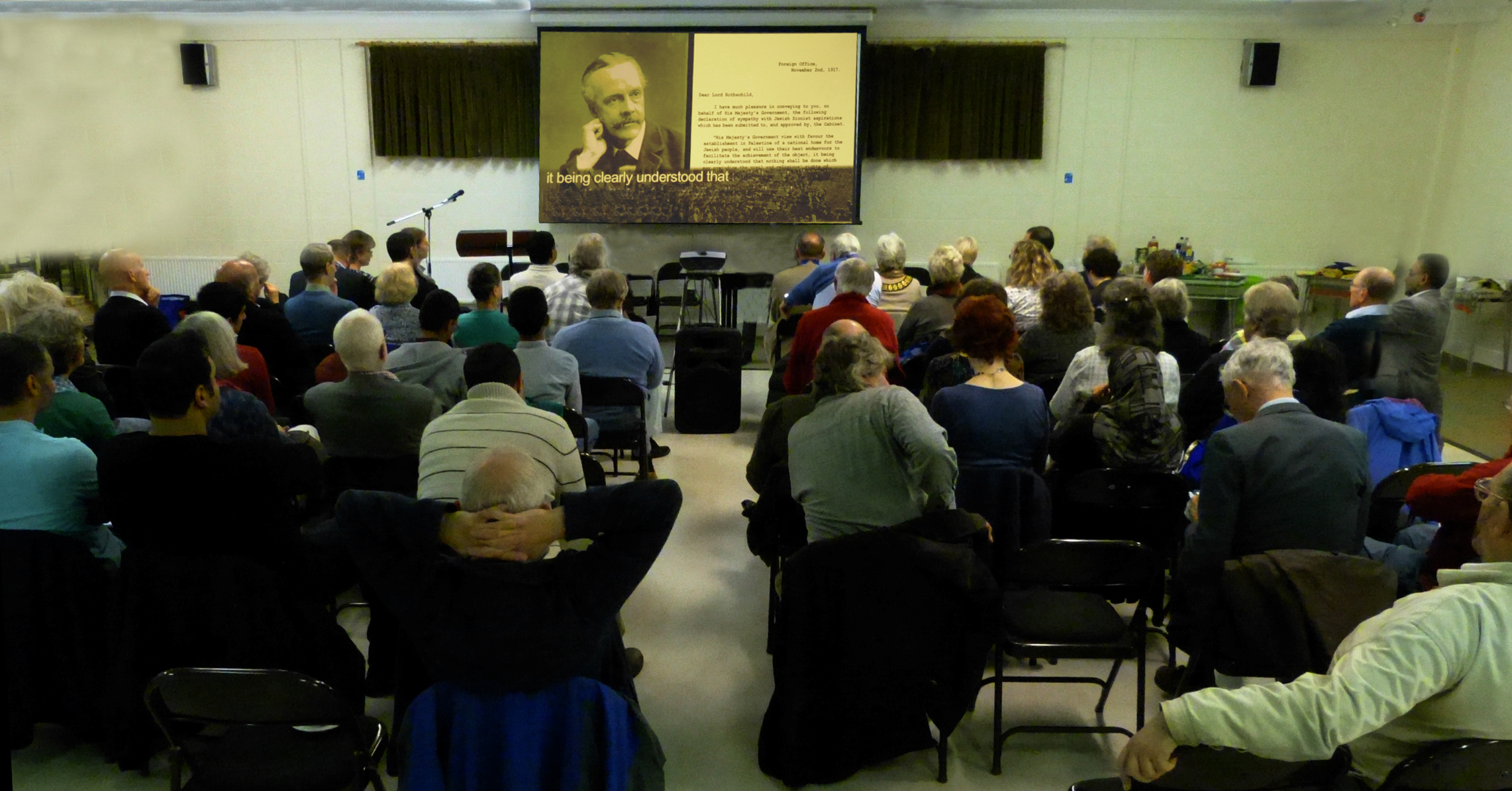 In introducing the theme, I told how my wife and I had tried to live into the narratives of the Palestinians and the Israelis. Eighteen years ago we were invited to stay with a Palestinian family in a refugee camp outside Bethlehem. This was a sobering, but enlightening experience. We have also recently been to a second world war prison camp in Holland and tried in some small way to live into the experience of the Jewish people, millions of whose families had been killed in the holocaust. But I said that there is another narrative to consider. That of ordinary English people like myself who have little idea of the British role in triggering the history which has led to the present situation in Israel/Palestine.

The invitation for the event stated, “November 2nd 2017 will be the centenary of the Balfour Declaration, when the British government announced its support for a Jewish homeland in Palestine, while stipulating that the rights of the existing inhabitants should not be prejudiced. This was one of several contradictory promises concerning the Middle East that were issued during the First World War. The fact that some of these promises were honoured, and others were not, has contributed significantly to today’s conflicts.

“The Balfour Project believes that understanding our country’s past actions and facing their consequences honestly are essential steps towards rebuilding trust. Its emphasis is to educate people’s understanding of the British historical role. It is not about apportioning blame, but laying a foundation of understanding from which an inclusive narrative can emerge.”

After an enlightening introduction by the Balfour team the excellent new film was shown, followed by a debrief on the history it revealed. Participants then broke into discussion groups to consider such questions as, “What one word sums up how you feel in response to the film?” and “If you could rewrite this chapter of history, what would have happened differently?” 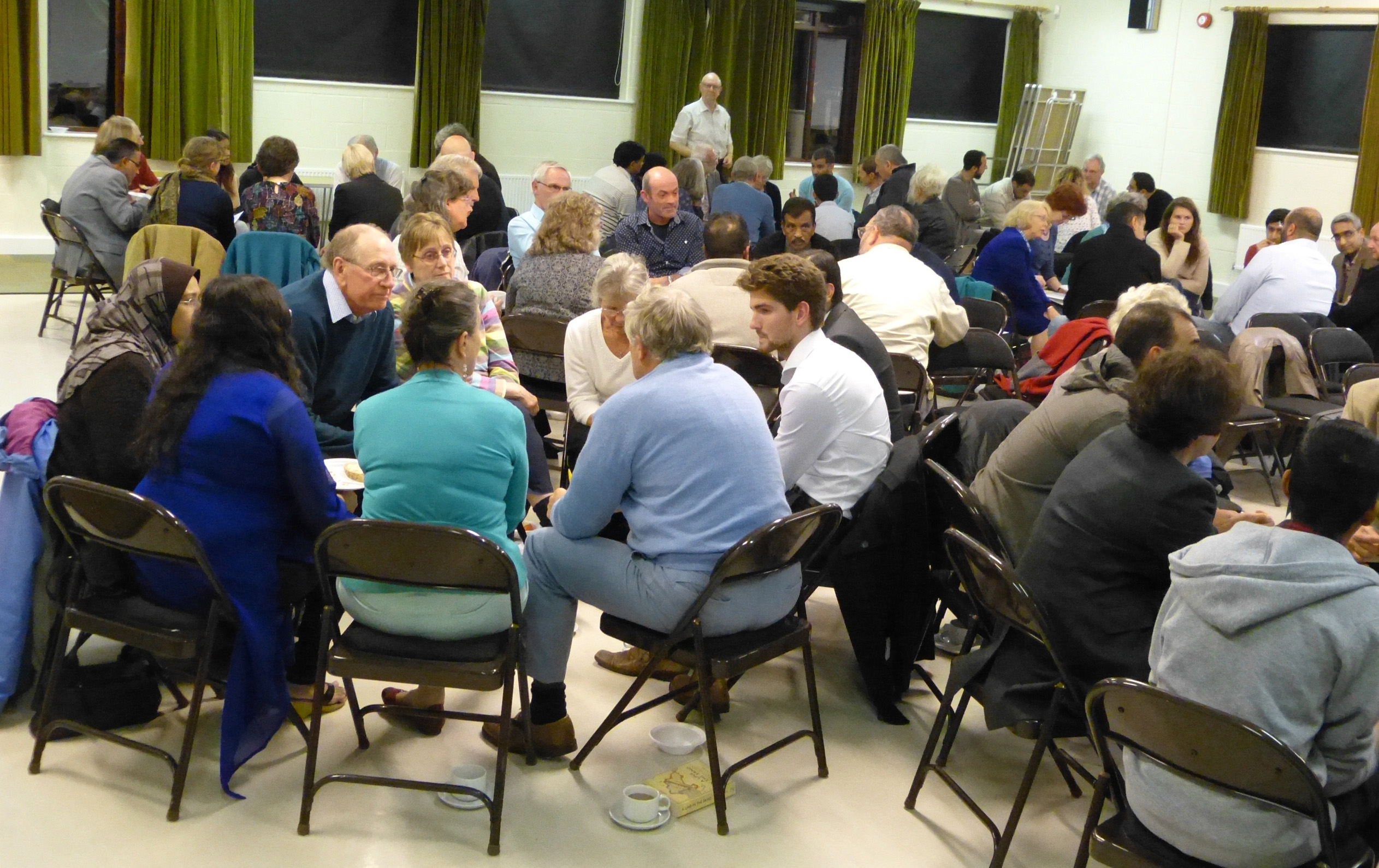 The feedback from this was conducted by Shahzad Nadeem, the president of West Berks Muslim Society. It brought out many insights and revealed how much the participants had valued the opportunity to learn about this topic in discussion with people they would never normally meet with. Palestinians present were also able to share movingly, but in a balanced way, how this stage in history was affecting their homes and families now.

However, the focus was on the role of the British. Peter Riddell, a Balfour Project Steering Group member, concluded the event by urging people not to take sides in the present conflict, but to seek a deeper understanding of the perspectives and motivations of everyone concerned, and out of that to take any constructive steps that come to mind.

For the Balfour Project, see: <balfourproject.org> . This includes the 20-minute film

This entry was posted in Events, Past. Bookmark the permalink.