The McMahon-Hussein Correspondence revisited. A lapse into clarity.

The origins of the McMahon-Hussein Correspondence – and the subsequent official interpretations, and the controversies surrounding those interpretations – are essential to the understanding of a great deal of Middle-Eastern diplomatic history during and after the First World War, as well as of the Palestinian dispute in the 1920s and 1930s. The central controversy with the correspondence related to Palestine. Since 1920, successive British governments have argued that Palestine was excluded from the territories promised to the Sharif. However, the Arabs and their supporters – including some senior British politicians, intellectuals, writers and others – have consistently argued that Palestine was promised to Hussein through this correspondence.

In fact, the Foreign Office records of the 1920s and 1930s clearly show that Sir Henry McMahon, given the urgency of the hour and in order to keep the Arabs onside, temporarily ‘lapsed into clarity’ in his letter to Sharif Hussein (24 October 1915), and included Palestine in the regions promised. Denial of a pledge given is not in a government’s – nor a nation’s – best interest. Acknowledgement, however belated, would not be a sign of weakness, but rather of civilisation.

The origins of the McMahon-Hussein Correspondence – and the subsequent official interpretations, and the controversies surrounding those interpretations – are essential to the understanding of a great deal of Middle-Eastern diplomatic history during and after the First World War, as well as of the Palestinian dispute in the 1920s and 1930s. The central controversy with the correspondence related to Palestine. Since 1915, the Arabs and their supporters – including some senior British politicians, intellectuals, writers and others – have argued that Palestine was promised to Hussein through this correspondence. Since 1920, however, successive British governments have argued that Palestine was excluded from the territories promised to the Sharif.
After 1939, although the correspondence disappeared from the British political scene, there have been a number of academic books published on the topic.
The correspondence consisted of a series of nine letters, exchanged between July 1915 and March 1916 between Sharif Hussein of Mecca, and Sir Henry McMahon, the British High Commissioner in Cairo, representing the British government.

There is a strong, and I believe a convincing argument, that it is only in the context of the development of the war that the correspondence can be understood. Otherwise its very existence just doesn’t make sense. The British – before the war and after it, had little, if any, desire whatever to promote Arab nationalism. 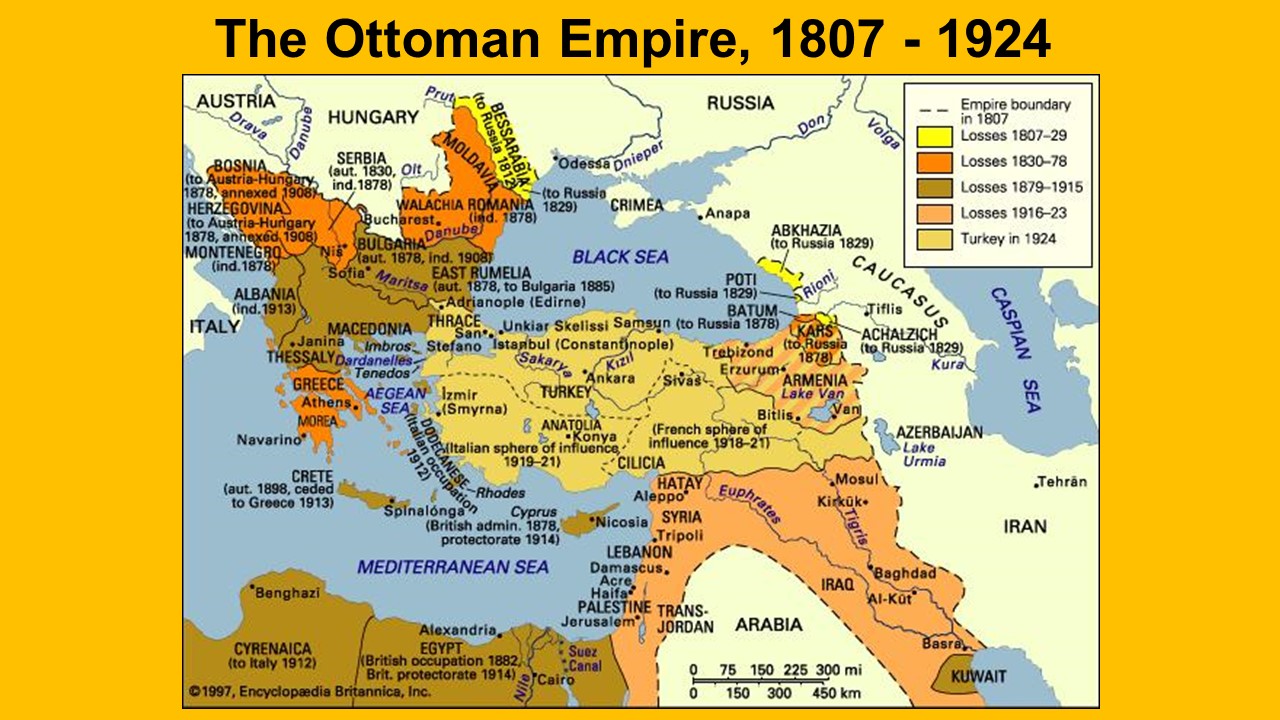 For the Ottomans in the summer of 1914, the possibility of a European general war raised the imminent threat of a Russian annexation of Istanbul, the Straits and Eastern Anatolia – all long-standing ambitions of the Russians – and the threat of ultimate dismemberment of the Empire among the Entente powers.
In November 1914, the Allies were confident the Turks would buckle rapidly under the combined onslaught of Britain, France and Russia. And by dealing the Ottomans a decisive defeat, the Allies believed they could also lay to rest the threat of jihad once and for all.
In early 1915, with stalemate on the Western Front, the Allies planned to force the Straits, take Istanbul, and knock Turkey out of the war. However, the naval, and then the ground campaign in Gallipoli (April 1915) turned into a disaster. In November 1915, the Allies began to withdraw from Gallipoli. The campaign had cost them 56,000 lives. It was a total defeat, and provoked a political crisis in Britain. And Allied war planners’ fear of jihad among colonial Muslims became even more acute. One hundred million Muslims lived under British rule.
Whitehall feared that war with the only independent Muslim power, and with the Caliph of Islam, would overtax India’s loyalty; there was, of course, another major British fear – the military threat to the Suez Canal at a time of need for the quick passage of Indian troops to France. Whitehall hoped that an alliance with the custodian of Islam’s holiest shrines would neutralise the appeal of the Ottoman sultan-caliph’s call to jihad. The British wanted, to quote one writer, ‘to rob the call to Holy War of its principal thunderbolt’, by striking an agreement with Sharif Hussein themselves. That’s the context.
Contacts between Britain and the Hashemites began, in fact before the war, in early 1914. Then, in November 1914, Kitchener, the British Minister of War, wrote to the Sharif in general terms that Britain would guarantee Arab independence and protection if the Sharif and the Arab peoples would support the British war effort.
This exchange eventually led to Abdallah’s letter (Abdallah being the second son of the Sharif) of 14 July 1915 to Sir Henry McMahon, which set out the natural boundaries of the Arab world. When this letter reached McMahon, the British were still confident of defeating the Ottomans in Gallipoli and were not impressed by Hussein’s pretentions.
However, as the Allied position in the Dardanelles grew increasingly untenable, McMahon resumed negotiations with the Hashemites with a new sense of urgency – an agreement with Hussein became more of a priority for the British.

A temporary lapse into clarity

McMahon realised that in order to strike a deal, he would have to respond in some way to the Sharif’s territorial claims. McMahon had, of course, been under orders from the very start, from London, to be as vague as possible in his correspondence, in order to leave all options open until the end of hostilities.
However, by October 1915, McMahon was informing London that ‘unless we give the Arabs specific assurances, they may well throw in their lot with the Turks’.
McMahon began to urge the Foreign Office for a quick decision. Around 20 October, London replied that McMahon could be ‘more precise’ if the situation ‘warranted it’. So, in his letter of 24 October 1915, the high commissioner sought to square British and French interests in the Middle East with the Sharif’s territorial ambitions.
I’ll come back to this controversial letter in a moment, but to take you to the end of the correspondence itself:
There was further correspondence exchanged between 5 November and 10 March 1916. As well as territorial questions the correspondence also dealt with the material needs to sustain the Arab revolt – the gold, grain and guns. The Sharif eventually launched his revolt against the Ottoman forces in the Hejaz on 10 June 1916.
Now, the controversial letter: In the letter, McMahon excluded certain districts from the Sharif’s territories, in deference to French interests, as he (McMahon) understood them at the time. This is the Palestine, or not Palestine, paragraph. 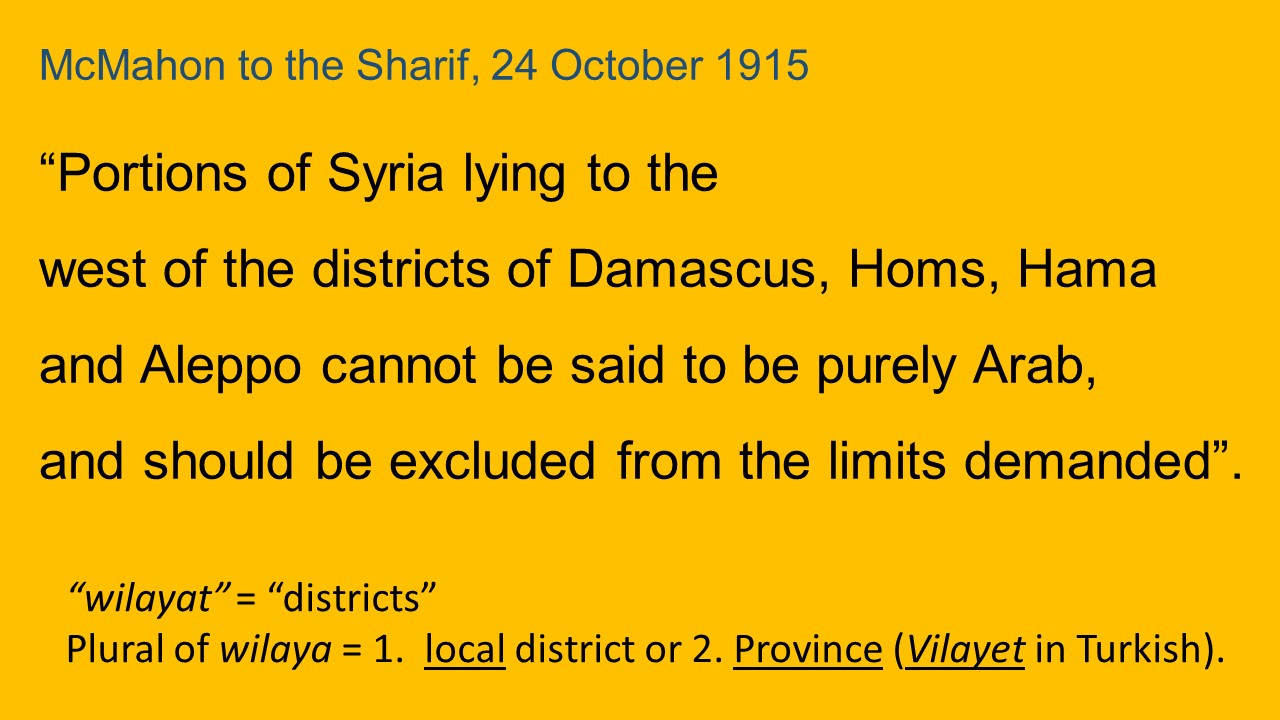 Portions of Syria lying to the west of the districts of Damascus, Homs, Hama and Aleppo cannot be said to be purely Arab, and should be excluded from the limits demanded. ]
This part of the debate is linguistic; it hinges on the word ‘districts’, which was rendered by wilayat in the Arabic translation sent to Hussein. Now wilaya (wilayat in the plural) in Arabic has two meanings: either a local district or a province, in Turkish a Vilayet.
Let’s look at the official Ottoman districts in 1915. 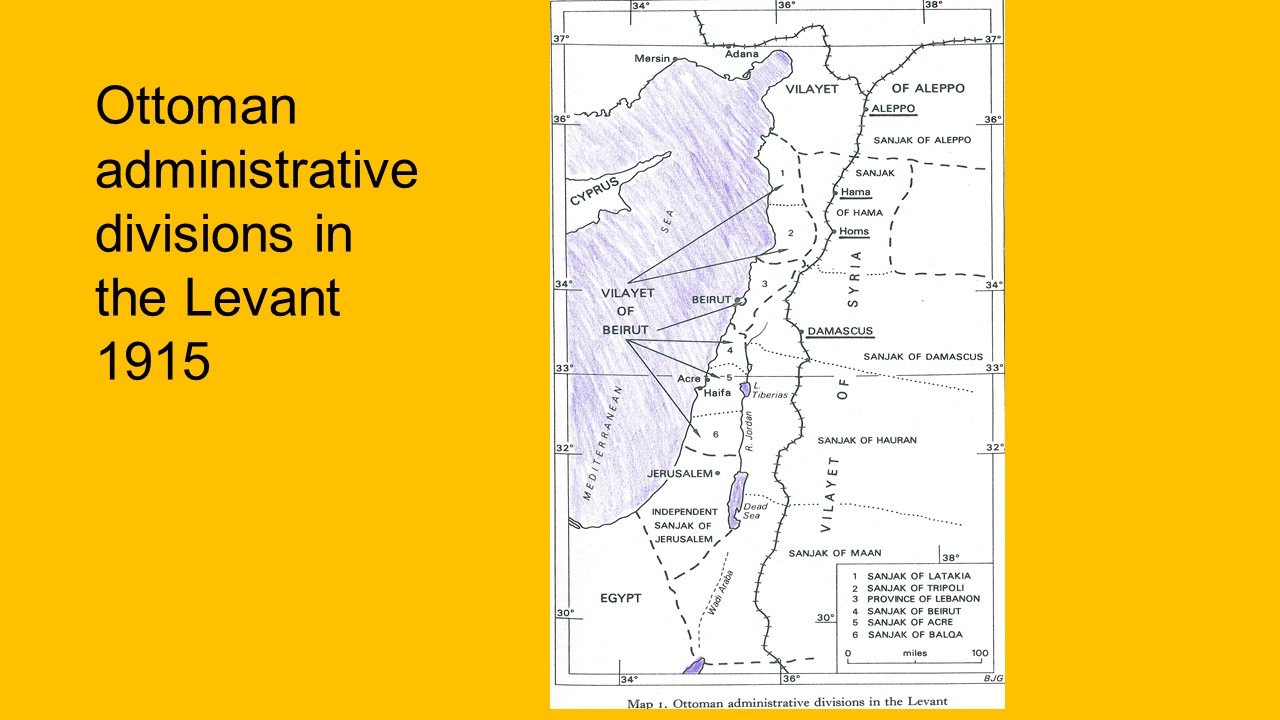 The British government have argued since 1920 that wilayat could only mean the plural of the term Vilayet/Province. Accordingly, the British argued, the resultant phrase ‘lying to the west of the Vilayet/Province of Damascus’ was a clear, formal, if implicit, exclusion of Palestine. 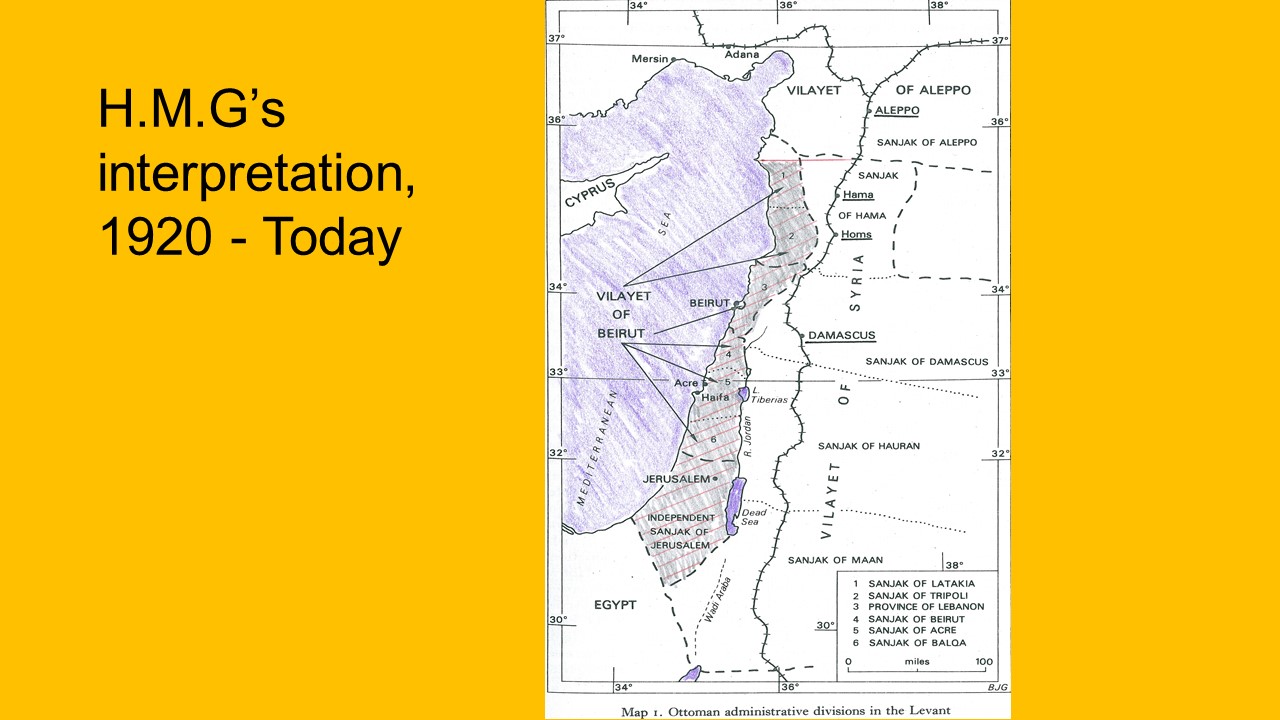 The Arabs countered that the only possible interpretation of the word wilayat was as local districts, not Vilayets/Provinces.
The Arabs pointed out, correctly, that there was no Vilayet/Province of Damascus, nor of Homs, nor Hama; there was indeed a Vilayet/Province of Aleppo, but its western border was the Mediterranean Sea – so in the linguistic context of the sentence, areas to the west of the Vilayet of Aleppo was nonsense.
Hence, the Arabs argued, the reference to the wilayat of Damascus clearly (in the linguistic context of the sentence) meant the vicinity/local district of Damascus, not the Ottoman Vilayet. 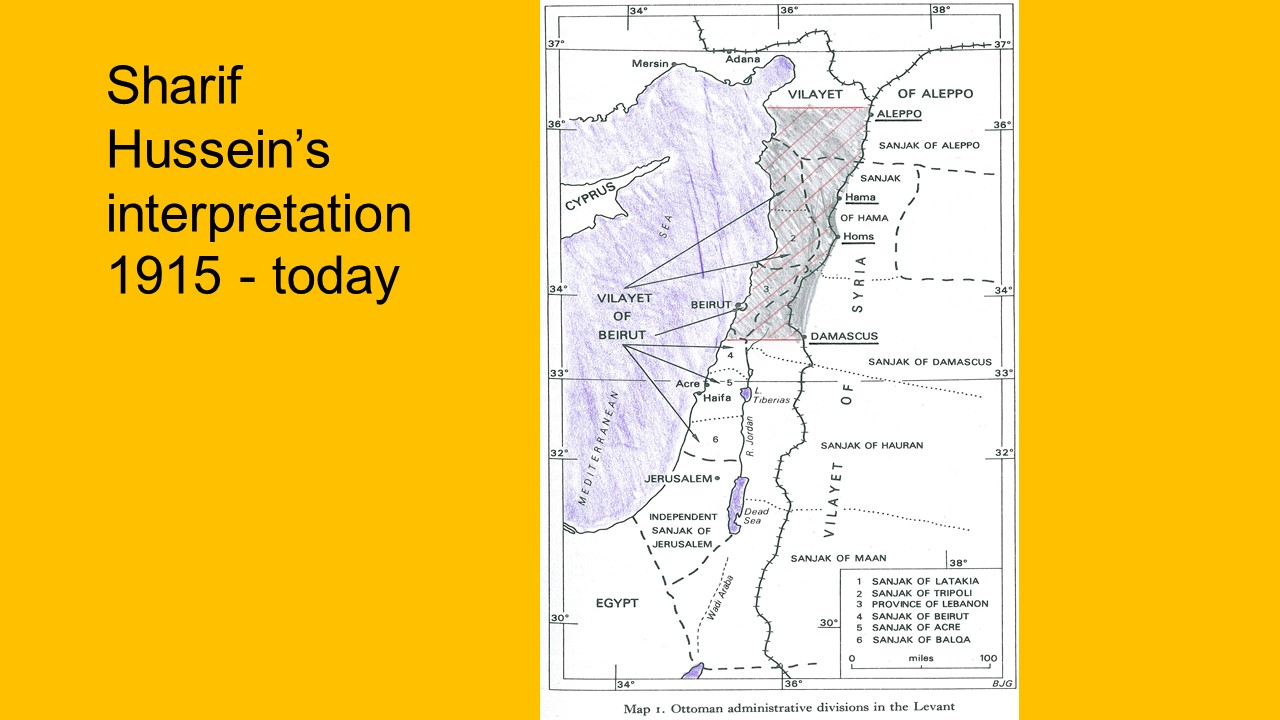 During the war, the Arab Bureau in Cairo – and immediately after the war, Arnold Toynbee, the Foreign Office official tasked with preparing memos on British treaties and commitments – read wilayat as meaning local districts i.e. that Palestine was promised to Hussein.
My impression – I’m putting my neck on the block here – is that in this letter, McMahon temporarily lapsed into greater clarity, given the urgency of the hour, in order to keep the Arabs onside.
However, in 1920, as I’ve mentioned, the Foreign Office brought forward the wilayat meaning Province interpretation, thus excluding Palestine.
McMahon himself believed that the letters had no binding force and would neither ‘establish our rights…nor bind our hands’.
We need to remember the mental, Empire view of these men. McMahon and his assistant, Storrs, Churchill, Balfour all considered the growth of Arab nationalism would remain insignificant. For them, the letters were written on a sheet of – ‘water’. The correspondence, primarily, was a war-time expedient to obtain a strategic, military edge over the Turks. All other considerations – at the time – were secondary. 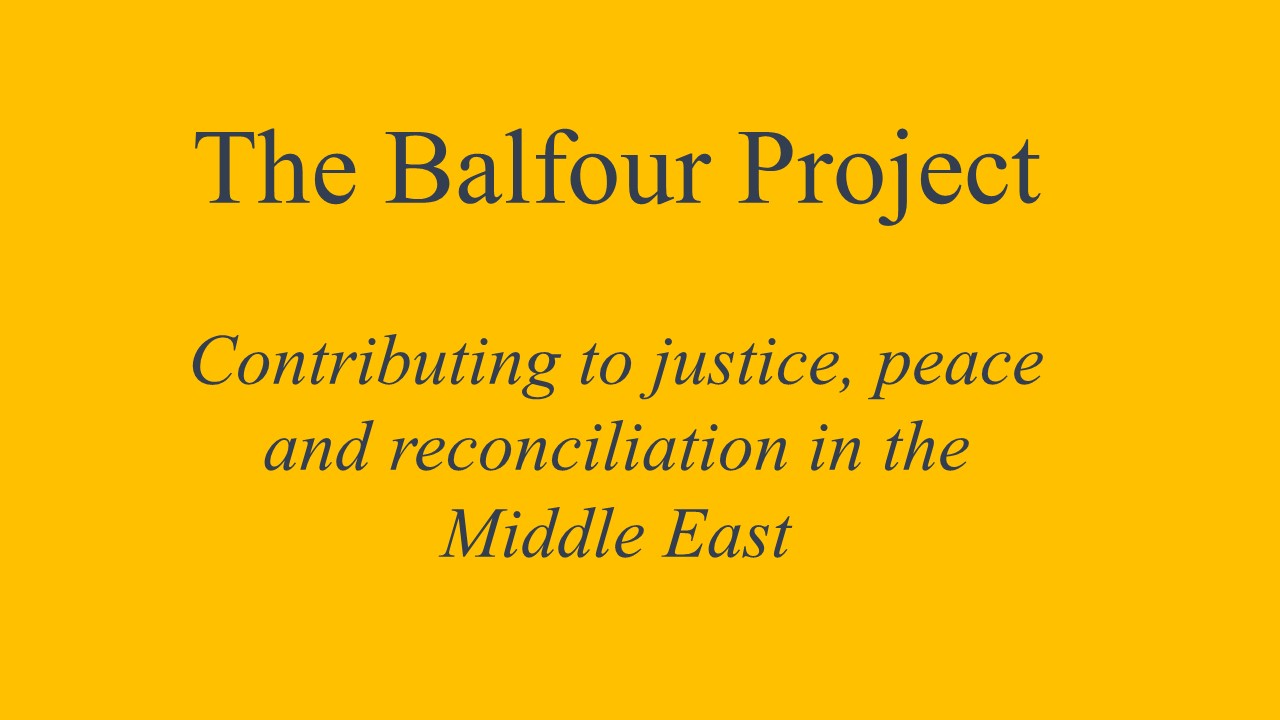 Three final points:
Firstly, in the five years or so after the war, there were plenty of internal discussions in the Foreign Office and the Colonial Office, as well as vigorous debates both in the House of Commons and the House of Lords, concerning all the WWI pledges, and concerning the government’s Mandatory policies in Palestine and Iraq.
For example: in 1918, Lord Curzon, probably adhering to Toynbee’s memos, told a Foreign Office committee that Palestine was included in the area pledged to Hussein, but in 1921, Feisal, at a Foreign Office meeting, was informed that Palestine was excluded because it lay “west of the Province of Damascus”. Feisal clearly explained the linguistic fallacy of the Foreign Office’s position, but to no avail. By then, the Hashemites were a diplomatic embarrassment for the British – and had no military power.
Secondly, successive British governments refused repeated requests to publish the whole correspondence until 1939, when Chamberlain’s government needed the support of the Arab world, as the clouds of war gathered once again.
Finally, the correspondence is, indeed, a minor detail of history for most Western historians of WWI, but not for the Arab World.
On the centenary of the correspondence, it is, perhaps, a timely reminder, to us British in particular, that our own governments, past and present, were and are quite prepared to be consistently economical with the truth – sometimes through Committees of Enquiries / Royal Commissions / Silence or other stratagems – when they consider it to be in their interest to be so, and when they think they can (effortlessly, and without any comeback), brush the issue under the imperial and post-colonial carpet.
It seems that Governments, all governments, occasionally need to be reminded that, sometimes, acknowledgement is not a sign of weakness, but rather of civilisation.
Dr Peter Shambrook
31 October 2015
p.a.a.shambrook@durham.ac.uk