Summary: the prime minister has told her Israeli counterpart that she is reviewing the UK’s position on moving the embassy to Jerusalem, an action in contravention of international law and UN resolutions and one that would upend decades of British policy.

If anything about the first few chaotic weeks of the Truss premiership has emerged with clarity – unlike her plans to  kickstart the UK recovery with a heady dose of  ‘trickle down’ economics –  it is that she acts forcefully but without any real grasp of consequences. Lost in the crisis and chaos of the mini-budget was a comment she made to the Israeli prime minister Yair Lapid on the sidelines of  the recent UN General Assembly meeting.

It was that she was “considering” relocating the UK embassy to Jerusalem, by any measure an astonishing statement considering that after former US President Donald Trump made that move in May 2018 only three countries have followed suit. They are Guatemala, Kosovo and Honduras. That a member of the UN Security Council would back Trump’s decision, one that only three small countries have supported, is in itself extraordinary. It would overturn decades of UK policy. It would give enormous impetus to the  Israeli government to continue its efforts to ‘cleanse’ East Jerusalem of Arabs through house occupations and expropriations. It would signal the death knell of the hopes and aspirations of Palestinians to have East Jerusalem as the capital of an independent state liberated from occupation.

Lapid was quick to seize on Truss’s comment tweeting: “I thank my good friend, British Prime Minister Liz Truss, who announced that she is positively considering moving the British Embassy to Jerusalem, the capital of Israel – we will continue to strengthen the partnership between the countries.” Lapid had earlier expressed his delight that Truss had been elected Tory leader and prime minister in a tweet where he described her “as a great friend of Israel.”

Given that she won the premiership with just the 81000 votes of Tory party members – a smaller margin than many had anticipated – and that the majority of sitting MPs preferred her rival Rishi Sunak, Truss in giving assurances to Lapid may well have been thinking that she needed to buttress her domestic support with organisations like the Conservative Friends of Israel (CFI.)

In her bruising leadership battle with Sunak she had gone all in in support of Israeli government policy. As the leadership contest was taking its final lap with the vote of party members Truss and Sunak sent letters to CFI. Sunak’s support for Israel was measured. Truss threw caution to the wind. In her letter she promised to “ensure that we deliver on our proposed Bill to end local councils bringing in Boycott, Divestment and Sanctions (BDS) policies that target Israel.” She called the policy “discriminatory” and one she would  “put a stop to.”  And in attacking the UN and it’s Special Committee investigating Israel, calling it “institutionally biased and a waste of money” she unequivocally backed Lapid. In her view, “UN representatives with a history of antisemitic remarks should have no role in reviewing the activities of Israel.” (There is no evidence for Truss’s claim that the three members of the committee have “a history of antisemitic remarks.”) 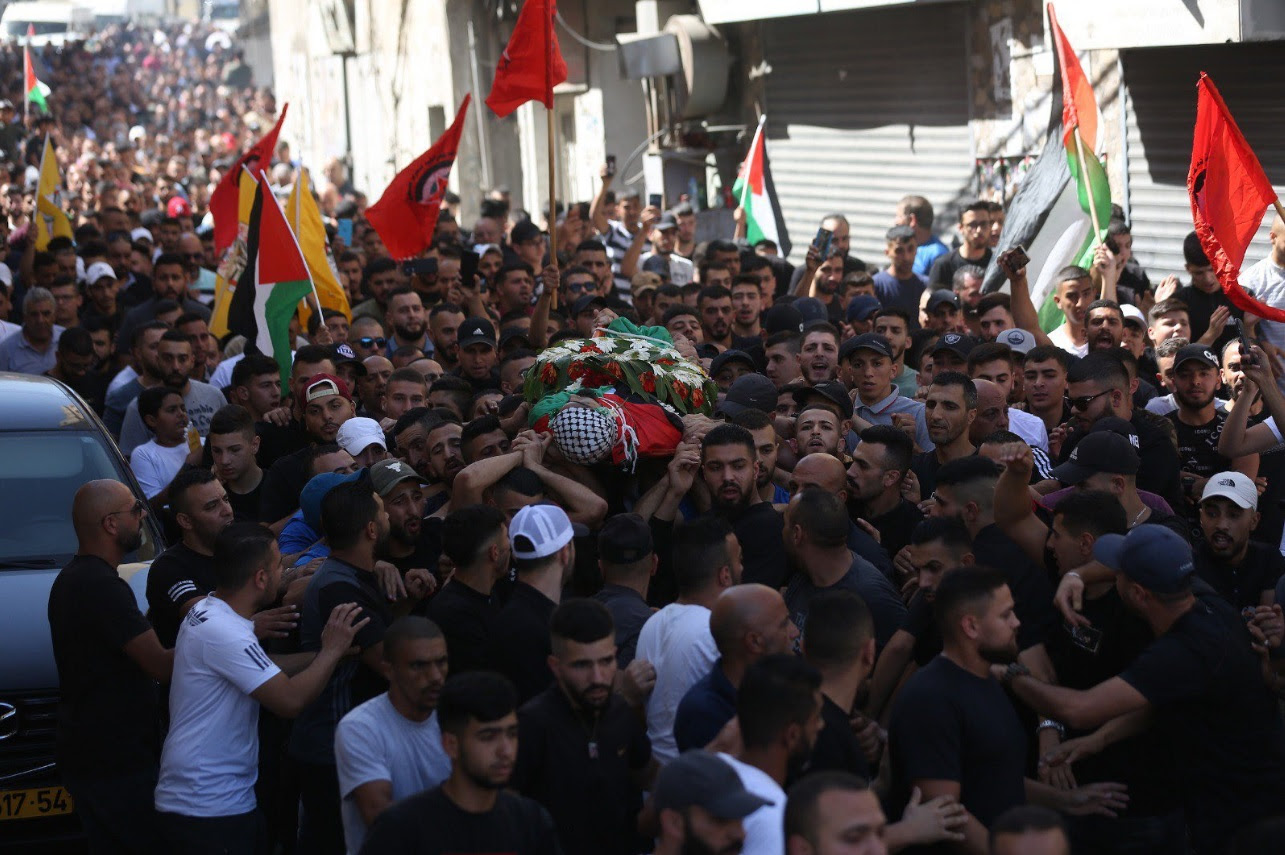 Thousands of Palestinian mourners in Jerusalem participate in the funeral of Mohammad Shaham (21) who was killed by the lsraeli occupation forces more than a month ago, Friday 30 September [photo credit: @Timesofgaza]

It was in the same letter that she committed to the embassy review saying that she had discussed it several times with her “good friend” Lapid. As the Jewish Chronicle noted at the time: “While stopping short of committing to a move, her announcement of a review is the furthest any leading politician already holding high office has gone on the matter.”

Her comment to the Israeli PM a few weeks later in New York strongly suggests that, like her mini-budget train wreck (which she affirmed once again to the BBC on 2 October she would hold on to,) this is a plan  upon which she intends to move forward.

A letter from two distinguished Canadian law professors to the Foreign Secretary James Cleverly argues strongly against such a move. They note that the UK has voted for resolutions 242, 252 and 478 regarding Israel’s actions in the occupied Palestinian territories (OPT). 242 speaks specifically to the “inadmissibility of the acquisitions of territory by war.” Regarding 252 the letter states:

As an occupying power, Israel is prohibited from asserting any form of sovereign claim to any portion of the OPT including East Jerusalem. Immediately after its conquest of the OPT in 1967, the Israeli Cabinet unilaterally and illegally annexed East Jerusalem and parts of the West Bank, amalgamating them with West Jerusalem. The UN Security Council immediately declared through resolution 252 that all “legislative actions taken by Israel… which tend to change the legal status of Jerusalem are invalid and cannot change that status.

478 addressed the formal annexation of East Jerusalem by the Knesset in 1980 using the Basic Law (“Jerusalem, complete and united, is the capital is Israel”.) The UNSC censured Israel in the strongest terms, calling it “a violation of international law.”

The UK voted for all these resolutions: “(Britain’s) longstanding official position has been to support international law and the body of UN resolutions respecting the Israeli occupation of Palestine.”  The professors observe that when Trump moved the US embassy, the UK was swift to join the international community in condemning the move.

Their letter notes that the British government had condemned Putin’s occupation and annexation of Crimea in March 2021. It quoted Neil Bush the UK’s OSCE ambassador:

Russia’s actions flagrantly violated its own international commitments including in: Article 2 of the United Nations Charter, the Helsinki Final Act and the Budapest memorandum. Their actions undermined and continue to undermine the security of us all.  The passage of time will never make them acceptable

And since this February’s invasion the Conservative government, first under Boris Johnson and now under Truss, has repeatedly stated that the occupation and annexation by force of sovereign Ukrainian territory is illegal citing international law. The irony appears lost on Liz Truss.

The full letter to James Cleverly is available here and for those of our members who would like to express their concern the balfourproject.org is a good starting point for how to do so.

Arab Digest is an independent UK media company that covers the news in the 22 Arab league countries. It is edited by William (Bill) Law, an award-winning journalist who worked previously for BBC News and Current Affairs, and the Canadian Broadcasting Corporation. For more information about Arab Digest or to sign up for a free 60-day trial please visit arabdigest.org

This entry was posted in News and tagged Embassy, Truss. Bookmark the permalink.