‘Britain should be more active in helping resolve Israeli-Palestinian conflict’

Commemorating the
97th Anniversary of the Balfour Declaration

A common theme from speakers at the Balfour Project’s annual event was that Britain’s history in the Middle East lays a responsibility on us to be more active in helping to resolve the Israeli-Palestinian conflict rather than less.

The event took place in St John’s College, Oxford on 30th October 2014 and was co-hosted by OxPeace, the Oxford University Network of Peace Studies. It was the third annual conference in the run up to the 2017 centenary of the Balfour Declaration, the British government’s statement of support for a Jewish homeland in Palestine with the proviso that the rights of the existing inhabitants were not prejudiced.

Next came an extract from an innovative new theatre piece, ‘Faraway, So Close’ by Amy Hailwood, which was subsequently staged at the Old Fire Station, Oxford on 5th and 6th December. Using drama and dance, it showed a British journalist posted to Jerusalem discovering the complexities of the history and relationships, and realising that she was not as much an uninvolved onlooker as she had thought!

The audience then viewed a documentary film produced by the Balfour Project. The film offered an impartial introduction to Britain’s 30-year involvement in Palestine for those who might be new to the subject. In 17 minutes, the audience followed Britain’s conquest of Palestine from the Ottomans at the same time that Zionism was becoming an increasing political force. They learned of the contradictory promises made by Britain during the First World War to both Jews and Arabs, and how these ultimately confounded British rule because both peoples believed they had been promised the same land and were prepared to fight for it. Finally the film described how Britain left Palestine in the face of increasing violence and chaos, abandoning Arabs and Jews to an undeclared war for domination. The story ended with the creation of the state of Israel in 1948.

The Balfour Project hopes this production will ultimately contribute to the growth of justice, peace and reconciliation between Israelis and Palestinians, by helping all parties to reflect on their responsibilities. In light of this, the panel were asked to say what had gone through their minds and hearts as they watched the film. A common theme was the plea from several speakers that British involvement is needed, and that Israel and Palestine cannot resolve the situation without outside help. The texts of their talks can be seen here:

The Very Revd Nicholas Frayling ended the evening with the hope that ‘this evening had been a contribution towards understanding some of the issues around Balfour and its consequences and perhaps, an inspiration to people of all faiths and none, especially in Britain, to join the Balfour Project in seeking to mark the forthcoming centenary of the Balfour Declaration in a way that is both positive and helpful – to all parties, and not least to the conscience of our own nation.’ 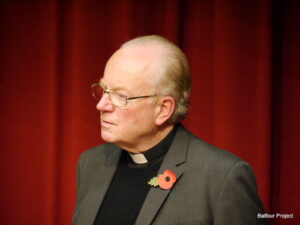 The young lady in the play with which the evening opened, confronted by such a bewildering array of facts and documents, said ‘Why didn’t I know this?’ It’s a question with which we may feel some sympathy because the Balfour Declaration was born in controversy; it contains a contradiction; and the consequence has been conflict.

I don’t know about you; I was moved by the film. I hadn’t seen it in its final form until tonight. I was also disturbed by it. And I felt informed by the contributions of the members of the panel, and I hope perhaps others of you have as well

The Balfour Project is inspired by a longing for reconciliation. Members of the Group have particular experience of reconciliation projects in Australia, Rwanda, Northern Ireland, as well as Israel and Palestine. The Balfour Project is not adversarial. It has a concern for both the communities in Israel and Palestine. But,  we are very conscious of the weight of history, particularly as it relates to our country, Britain.

The A-Z – the alphabet of historically-conditioned conflicts might today encompass Afghanistan to Zimbabwe – A to Z. A few decades ago it might have been Algeria to Zaire; but in every generation, in the middle there has been the running sore of Palestine and Israel.

In Northern Ireland, Australia, and South Africa, people have come together. As a South African commentator put it: ‘those who had regarded each other as unspeakable, eventually sat down together and talked about the unthinkable.’

We in the Balfour Project were inspired by Bishop John Austin Baker, formerly Bishop of Salisbury, and before that in Westminster, who died a few months ago. Bishop John wrote this, and it’s very apposite to what we’ve been hearing tonight:

‘Politics and peace processes, even when conducted with integrity and the best intentions, can take us so far and no further. True and lasting reconciliation depends on treading the more costly road of sorrow and penitence.’

Penitence, or Repentance is of course a religious term, but it has a very worldly significance, because it takes seriously the inescapable relationship between pardon and peace. Another writer whom we have lost this year, is Maya Angelou – the African-American writer, who wrote:

‘History despite its wrenching pain
Cannot be unlived but if faced
With courage need not be lived again.‘

That’s what the Balfour Project is about in relation to Israel and Palestine. We in Britain as we have learned tonight have a particular responsibility to take this seriously – to inform ourselves about the history, pre- and post-Balfour, however painful, in order that mistakes are not perpetuated or repeated, and where appropriate, that they are apologised for.

It has been truly said by a Palestinian that ‘the only road to peace is through the door of justice’. That justice must include all the peoples of the land which the three great world faiths call ‘Holy’.

We hope this evening has been a contribution towards understanding some of the issues around Balfour and its consequences. Perhaps also I dare to hope it has been an inspiration to people of all faiths and none, especially in Britain, to join us in seeking to mark the forthcoming centenary of the Balfour Declaration in a way that is both positive and helpful – to all parties, and not least to the conscience of our own nation.

Thank you so much for sharing this evening with us. 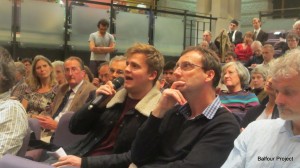 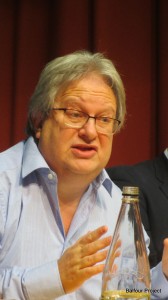 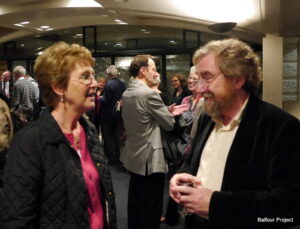 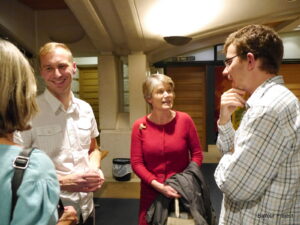 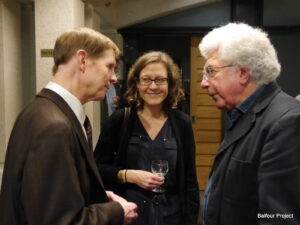 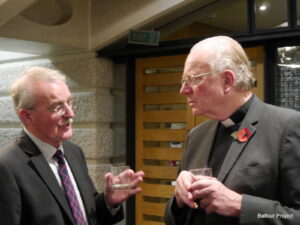 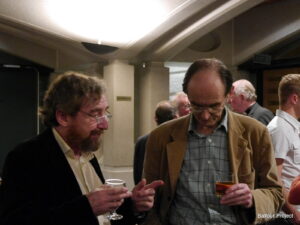 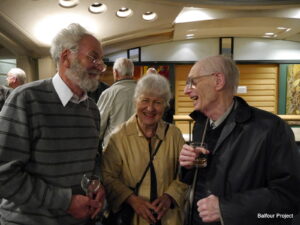 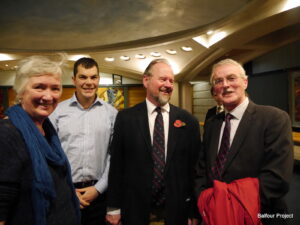 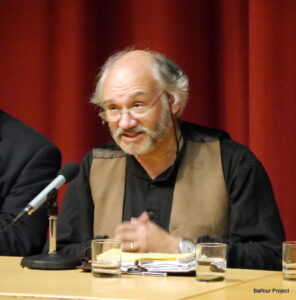 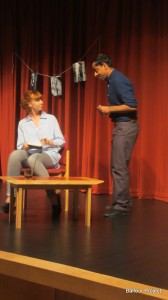 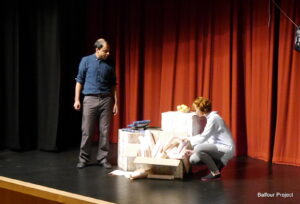 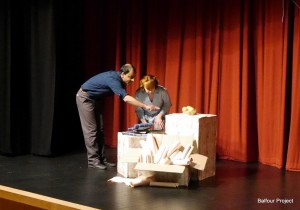 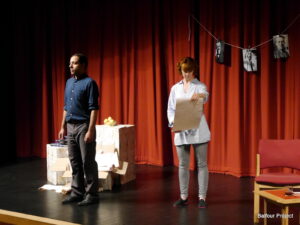 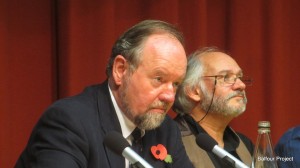 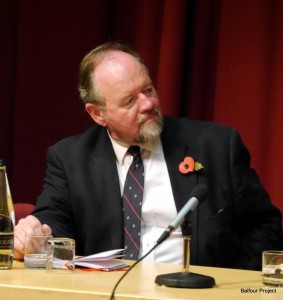 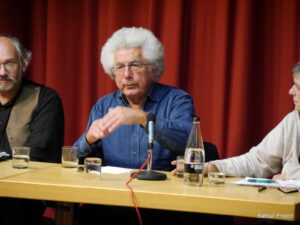 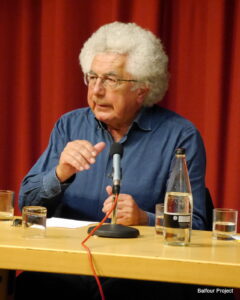 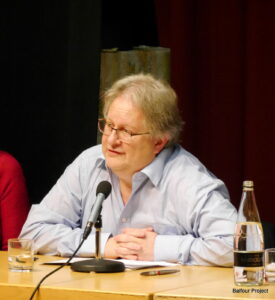