The McMahon promise to Hussein 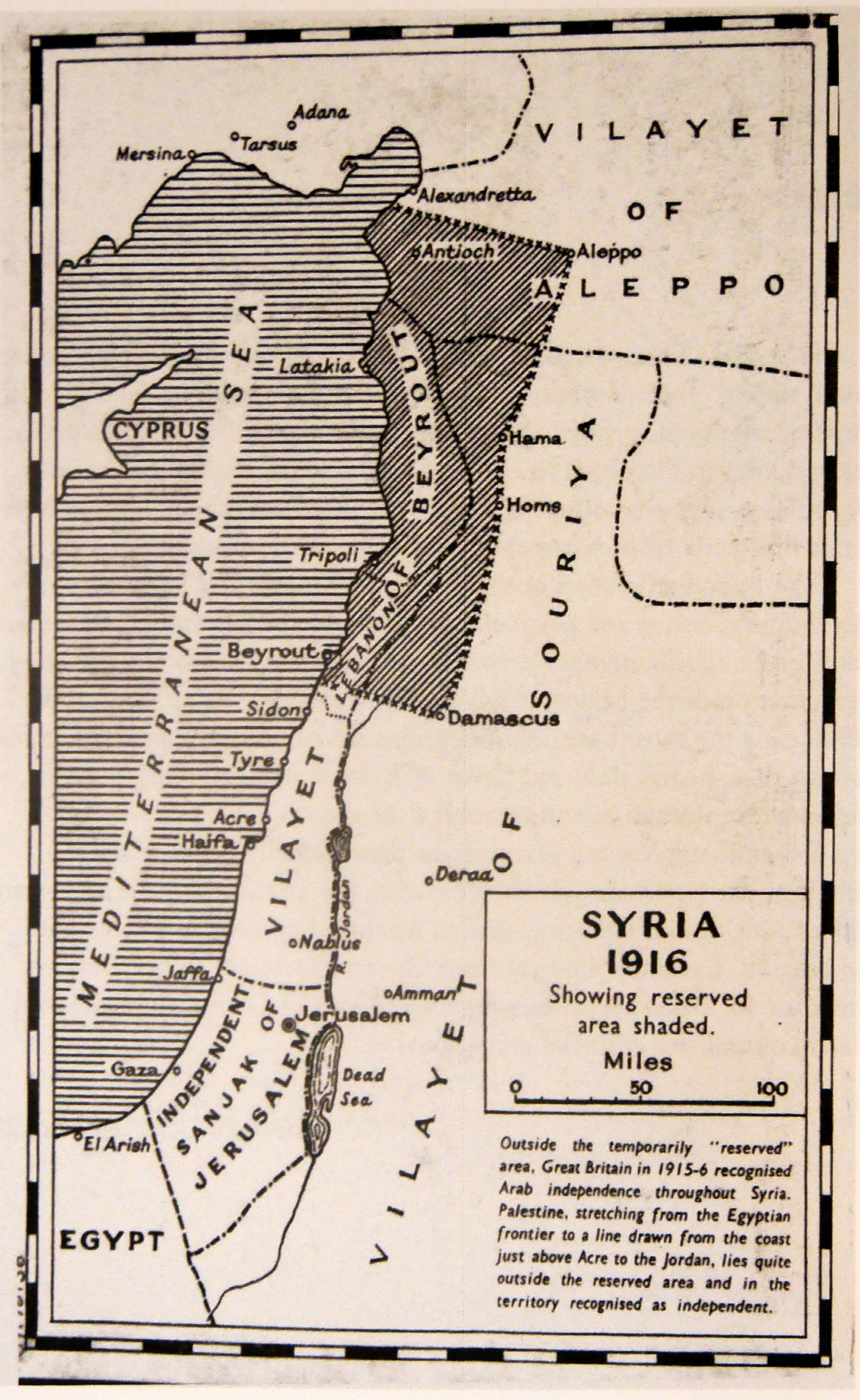 This map from JMN Jeffries, Palestine, The Reality, (London 1939) shows that Palestine was in the area promised to Hussein by McMahon. Only Lebanon and part of current Syria to the North were excluded.

In 1915 Sir Henry McMahon, British High Commissioner in Egypt, offered Sherif Hussein of Mecca an independent Arab state if he would help the British fight against the Ottoman Turks. Hussein’s interest in throwing off his Turkish overlords converged with Britain’s war aim of defeating the Ottomans.

There has been much disagreement as to whether this promise included Palestine. The area promised to the Arabs in McMahon’s letter of Oct 1915 excluded only the territory to the west of a line from Damascus north to Aleppo.  Palestine, far to the south, was, by implication, included.   The Arabic translation, which Hussein received,  indicated that we were free to make these promises without reference to France. The British later denied that Palestine was included in the promise and refused to publish the correspondence until 1939.

This article highlights some of the comments made at the time that reveal that British politicians and officials were privately aware of their obligation to offer Palestine to Hussein as a result of the McMahon-Hussein correspondence. These confidential comments reflect some of the embarrassment felt in official circles as a result: after all, Britain had subsequently made another, conflicting promise, that the Jewish people could build a National Home in Palestine.

Lord Curzon chairing the Eastern Committee meeting of 5th Dec 1918 at which Balfour was present is minuted laying out the government’s position. Curzon had explained that: .. Palestine was included in the areas as to which Great Britain pledged itself that they should be Arab and independent in the future… (1)

In 1919 the Political Intelligence Department of the British Foreign Office drafted a confidential memorandum on the issue for the use of Britain’s delegation at the Versailles Peace Conference. With reference to Palestine, the memorandum read: “H.M.G. [His Majesty’s Government] are committed by Sir Henry McMahon’s letter to the Sherif on October 24, 1915, to its inclusion in the boundaries of Arab independence.” (2)

In 1920 there were discussions in Whitehall on the McMahon/Hussein correspondence comparing the English and Arabic translations. For the previous five years it had been hoped that the ambiguity of McMahon’s promise to Hussein would reprieve Britain from any awkward commitments. However, ‘to the horror of those present at the December 1920 meeting, it was revealed that this sleight of hand had then been lost in the Arabic translation. As one official, who was present, put it: ‘In the Arabic version sent to King Husain this is so translated as to make it appear that Gt Britain is free to act without detriment to France in the whole of the limits mentioned. This passage, of course, had been our sheet anchor: it enabled us to tell the French that we had reserved their rights, and the Arabs that there were regions in which they would have eventually to come to terms with the French. It is extremely awkward to have this piece of solid ground cut from under our feet. I think that HMG will probably jump at the opportunity of making some sort of ‘amende’ by sending Feisal to Mesopotamia’. (3)

In 1922 Lord Islington, introducing a debate on the Palestine Mandate in the House of Lords, declared ‘the Mandate for Palestine in its present form is inacceptable to this House, because it directly violates the pledges made by His Majesty’s Government to the people of Palestine in the Declaration of October, 1915, [the McMahon promise] and again in the Declaration of November, 1918, and is, as at present framed, opposed to the sentiments and wishes of the great majority of the people of Palestine.” Government policy was defeated 60-29.

In 1923 Joseph Jeffries wrote a series of articles in Lord Northcliffe’s Daily Mail. These presented a hitherto uninformed British readership  with details of official promises made to the Arabs in 1915-16 of post-war independence for Palestine in exchange for their support in the struggle against the Ottoman Empire.

The senior civil servant at the Colonial Office, Sir John Shuckburgh, had indeed been making strenuous efforts behind the scenes, with the previous as well as the present government, to sit tight on the documents. He offered his own circumlocutive confessions, minuting in January 1922 that “there is sufficient doubt in the matter to make it desirable not to drag the controversy out into the daylight”, advising some months later “that our best policy is to let sleeping dogs lie as much as possible”. And in a letter of November 1922 to the British high commissioner in Palestine, Sir Herbert Samuel, he commented that the question remained “troublesome” and that the official version of McMahon, as paraphrased to the outside world, was “one of the weakest points in our armour”.

Sir Edward Grey Foreign Secretary in 1915, speaking in the House of Lords in 1923 ‘ insisted, [that Palestine] had been “undoubtedly given to the Arabs” well in advance of the quite different priorities implicit in the Declaration. The “best way of clearing our honour in this matter is officially to publish the whole of the engagements” and leave it to the public “to consider what is the most fair and honourable way out of the impasse”.

The Middle East Department of Britain’s Colonial Office gave the same interpretation in a confidential 1924 memorandum to the Cabinet. The Department addressed the geographic issue in the McMahon letter and gave a reading consistent with the Palestine Arab reading. The Department wrote: ‘The natural meaning of the phrase “west of the district of Damascus,” has to be strained in order to cover an area lying considerably to the south as well as to the west of Damascus city.’  (4)

Sir Edward Grey who was the Foreign Secretary in 1915 wrote in his memoirs in 1925: ‘There were two secret treaties … made in the earlier part of the war, and that were important. One was the promise to King Hussein that Arabia should be an independent Moslem State. This was the only one of these secret treaties that was due to British initiative and for which we had a special responsibility greater than any of the other Allies.’ Grey, Twenty-Five Years, vol 2, p235

In 1926, 11 years after offering Hussein support for an Arab State, Britain exiled him to Cyprus where his wife died in 1931.

Britain suppressed discussion and refused to publish the correspondence until 1939. Note part of the comments at the end of the 1939 document:

The language of some of the original drafts or contemporary translations has, however, been modified in certain places where the language has been criticised on the ground that it does not reproduce accurately the Arabic of the actual correspondence and the criticism has been found on examination to be justified.