The 1917 Balfour Declaration, issued by the British Empire at the height of its power, promised to help “facilitate the achievement” of a “national home for the Jewish people” in Palestine. This recognition of the Jewish people’s right to a national homeland was integrated into the Mandate granted by the League of Nations to the British Crown in 1922 and was considered a key step toward the achievement of statehood for the Jewish people in its ancestral homeland. In Israel’s 1948 Declaration of Independence, it was presented as one of the major internationally recognized foundations for the establishment of the State of Israel.

The language of the Declaration, however, was somewhat vague and noncommittal. It did not define the borders of the territory on which the Jewish state was to be established.  Moreover, it did not explicitly mention the rights of the indigenous Palestinian people who had inhabited the land for centuries and, most importantly, failed to recognize the Palestinian right to self-determination in a national home alongside the Jewish state. In fact, the seeds of the ongoing dispute between the Palestinians and Israelis were, to a large extent, sown in 1917.

The year 2017 marks the 70th anniversary of UNGA Resolution 181 which terminated the mandatory powers of Great Britain in Palestine and paved the way for its partition into a Jewish and an Arab state. It also marks the 50th anniversary of the Israeli occupation of Palestine in its entirety in the Six-Day War of June 1967.  Although Israel subsequently ceded some of that territory, the occupation of Palestinian lands continues to this day.

We, the undersigned members of the Political Working Group (PWG), believe that the meeting on Britain’s Broken Promise: Time for a New Approach in Central Hall Westminster is the appropriate occasion to correct this historical wrong and complement the original Declaration by stating that both the Israeli and the Palestinian people have equal rights to self-determination in two states – Israel and Palestine — living side by side along the 1967 borders in peace, security, and prosperity.

We call upon the UK Government to issue such a statement, expressing recognition of the State of Palestine without further delay. 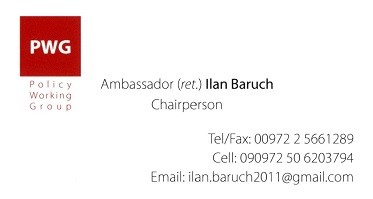