Mahatma Gandhi and the Wounds of History: Palestine, India and the British Empire in the 20th century 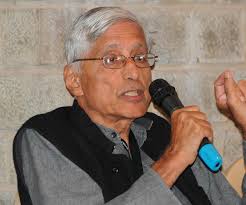 The British Parliament does not often hear an Asian perspective on the Middle East. The very term ‘Middle East’ is Europe-centred; in India the region is known as West Asia. This perspective was offered by Rajmohan Gandhi, a historian and a grandson of Mahatma Gandhi, at a talk to 170 people in the House of Commons. The event was sponsored by the Rt Hon Tom Brake MP, the Duke of Montrose, Ian Murray MP, Dr Philippa Whitford MP and the Balfour Project.

Professor Gandhi compared India’s struggle for independence with the struggle in Palestine at the same time.  He quoted his grandfather who in 1920 had predicted that Sherif Hussein and his son would be puppets in the hands of Europeans. [The British Government, which had promised Hussein support for an Arab State including Palestine in 1915, reneged on that promise and then exiled him to Cyprus in 1926 – Ed].

In India a major stumbling block was the inability to find a political structure which would meet the concerns of both the Hindu and Muslim communities, a challenge as intractable as meeting the concerns of the Arab and Jewish communities in Palestine. In India the British authorities made ambiguous statements and pushed through their plan for partition, actively lobbying against Gandhi’s ideas of a united India. Churchill, who was constantly hostile to Gandhi, supported partition. But partition resulted in one million killed and 14 million displaced. In each case Britain failed, tragically.

As Professor Gandhi said, ‘Doublespeak does not work, and imposed solutions do not work. When confronted by the profound divisions that marked both the subcontinent and Palestine, what was of greater importance for the Empire’s leaders: the strategic implications, or the future of millions of divided neighbours?’

Yes, there was ‘imperial divide-and-rule’, he said, but that was not the only problem. ‘Hindu, Muslim and Sikh voices deliberately stoked ill-will among Indians. ‘The twin components of Gandhi’s nonviolence, ‘fear not’ and ‘hate not’, were both difficult to practice, but the first found wider acceptance than the second.’ He quoted a statement by his grandfather in 1947: ‘Outwardly we followed truth and non-violence. But inwardly there was violence in us. We practised hypocrisy and as a result we have to suffer the pain of mutual strife. Even today we are nurturing attitudes that will result in war.’

In Professor Gandhi’s view, his grandfather made mistakes. In 1938, when Jews were enduring Nazi atrocities, he had advised them to adopt a non-violent approach. ‘He should not have offered his utopian advice,’ said Professor Gandhi. ‘Yet he may have been right in expressing a sense of injustice at the forcible conversion of Arab-majority Palestine into a Jewish homeland, and in saying that the entry of European or other Jews into Palestine should take place with Arab agreement. And surely he was right in suggesting that in the end the Arabs and Jews of Palestine, and the Jews from outside who wished to reside there, had to find a negotiated agreement.’

Gandhi failed to inspire Indians to the extent he hoped. But he left behind ‘a nation for all where – at least in theory and often in practice – Muslims and other minorities receive the state’s protection. Now, however, 70 years later, there is a concerted attempt to make India a Hindu state where Muslims, Christians and other non-Hindus must accept a subservient status.’

From his survey of this history, Professor Gandhi drew the lesson that for peace to prevail, the past must be squarely acknowledged. He gave examples of actions which have ‘melted resentment’, including the visit of the Queen to Ireland in May 2011. ‘Her acknowledgment that things had been done in Ireland which “we wish had been done differently or not at all” seemed to impact a broad spectrum of that land.’

Much of the question time focused on Britain’s responsibility for the Israeli-Palestinian conflict. The Duke of Montrose thanked Professor Gandhi for ‘opening a window onto our incredible pride and unwarranted self confidence… giving us perspective on what we created in the Middle East where our self interest was a major driving force.’

‘We contributed to this chaos,’ said Philippa Whitford, who has worked as a surgeon in Gaza. ‘We absolutely have a responsibility, and we should recognise Palestine. A degree of partition is needed until the power of each population is equalised. Then there can be a more enlightened conversation and the people there can be involved in what they see as the solutions.’

Professor Gandhi responded by saying that this is an issue for the people of Britain as much as for the politicians. ‘You have an incredible history of free speech, daring speech, from Magna Carta down to today. In my historical research in India, I have come across many British people who came to India, learnt our languages and did amazing things, such as reviving our literature. You need to recapture the boldness which marked your history. Now the world is here in Britain, becoming part of this history. Don’t worry about your image. The world needs people who will come together, speak unitedly, and do what needs to be done. Who else will do this for the world?’

Nicholas Frayling, former Dean of Chichester, closed the event by quoting Maya Angelou: ‘History, despite its wrenching pain, cannot be unlived, but if faced with courage, need not be lived again.’ The centenary of the Balfour Declaration this year, he said, ‘needs to be a time of heart-searching reflection. Arthur Balfour was instrumental in creating a homeland for the Jewish people. But the second half of the Declaration has never been implemented. The commemoration of the centenary cannot be a celebration when so many people have been hurt.’

Tom Brake concurred. ‘We must ensure that the Balfour Declaration is delivered in its entirety not just for the Israelis but also for the Palestinians.’

The full text of the lecture is here

This entry was posted in Past and tagged 1915, 1920, 19th Century, Churchill, Gandhi, partition. Bookmark the permalink.