Palestine 1917-2017: Reflections on a refugee’s story, my great-grandfather’s war diary and the legacy of Britain’s actions in Palestine.

Omah Amarah is 84 years old. From the amount of energy which sparks up as he gets started on his story you can sense his tale comes from the heart; this is no dry text book account of history we are about to hear as we ask him about how he ended up living in a refugee camp. 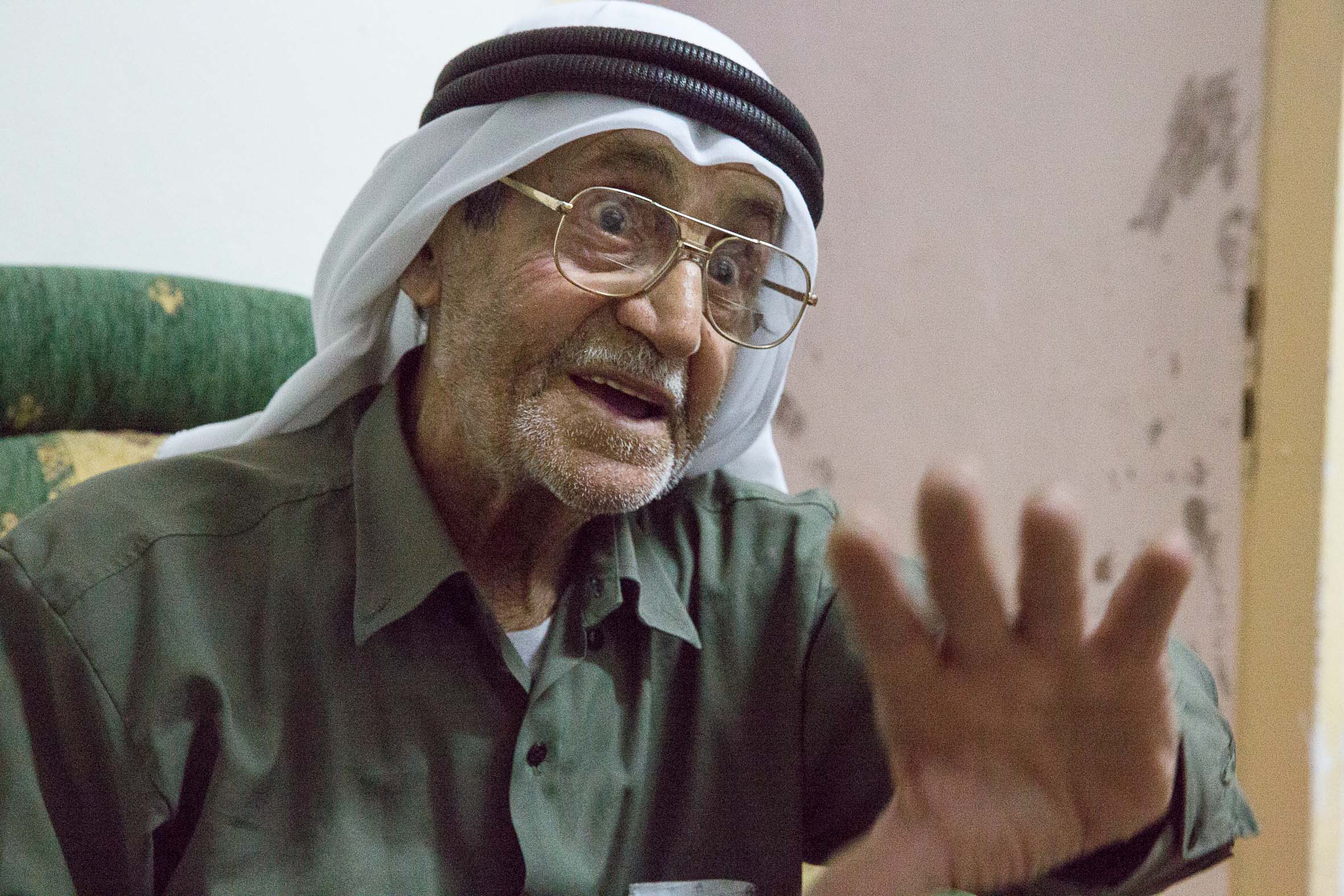 Omah was just 15 in 1948, the year when the state of Israel was birthed out of a war which forced 750,000 Palestinians to flee their homes. Since 1948, Omah and his family have lived as refugees, settling in Tulkarm refugee camp which at the time was on land under Jordanian control; it is now under Israeli military occupation. Unable to return to his family’s land in what then became Israel, Omah has instead spent 69 years of his life in a camp which was intended as emergency stop-gap housing that has not since been replaced or enlarged; the camp which used to serve 8, 450 refugees now accommodates 21, 000[1]. The camp has made a permanent fixture out of their refugee status; for these people 1948 has most certainly not been forgotten.

“Where is the democracy?” Omah cries as he lifts his eyes to the sky beyond the ceiling of the living room of the UN owned house he has lived in since coming to the camp. “Europe is always talking about democracy. Where is it?” He is referring to the UN resolution 242 which states that Palestinians have the right to return to the lands which were taken from them in 1948. This reluctance to hold Israel, a member of the UN, to account for the ways it fails to uphold international law and has failed to enforce Resolution 242, is a reluctance shared by most of the international community. However, Britain has played a very particular historic role in the events which led to 1948 and to the position Omah finds himself in today.

Omah does not speak English. We are listening to his life story with the help of a translator and yet a few English phrases punctuate his Arabic. He talks of the fighting which took place between Jews and Palestinians in 1947-1948 and needs no translator to tell us he thinks many of the weapons Jews used then were “Made in England”.

In fact there are many in Palestine today who believe that the military occupation of Palestine by Israel (now well into its 50th year) is a situation “Made in England”. To whatever extent you agree with this, I know that I for one have not been able to forget the way Omah Amarah jabbed his fingers and focused his intensely animated attention on me, the only Brit in the room, at this point in his story.  It’s quite hard to dispute the viewpoint of a man who has been a refugee for 69 years.

I was not unaware of Britain’s imperial enterprises in Palestine when I signed up to be a human rights observer with the Ecumenical Accompaniment Programme in Palestine and Israel (EAPPI) for three months this year. And, Omah was not the only Palestinian I met whose ears pricked when I said I was from the UK. I fail to remember just how many times I was told my country bore responsibility and that we should apologise for what we started by promising the Jews a national home in Palestine in the Balfour Declaration of 1917. Some Palestinians qualified this demand with the acknowledgement that it was not ordinary British people who were to blame but our leaders. Others made no such qualifications; it seemed I was being held squarely responsible for the promises my country made in 1917.

Sometimes in these conversations I tried to apologise on behalf of the UK and yet every time it led me to wonder where the line which separates my responsibility from that of my political leaders actually lies. Am I right, or crazy, to feel guilt over what my country did one hundred years ago? What about when those British men and women who participated in the wars which brought about colonial rule in Palestine? What about when they were members of my own family?

I hold in front of me my great-grandfather’s diary of the months he spent as a soldier in the British army in Egypt and Palestine during the 1st world war.

The diary chronicles his regiment’s march from Egypt up to capture Jerusalem from the Ottomans in 1917. Exactly one hundred years previous to my own expedition to Palestine. 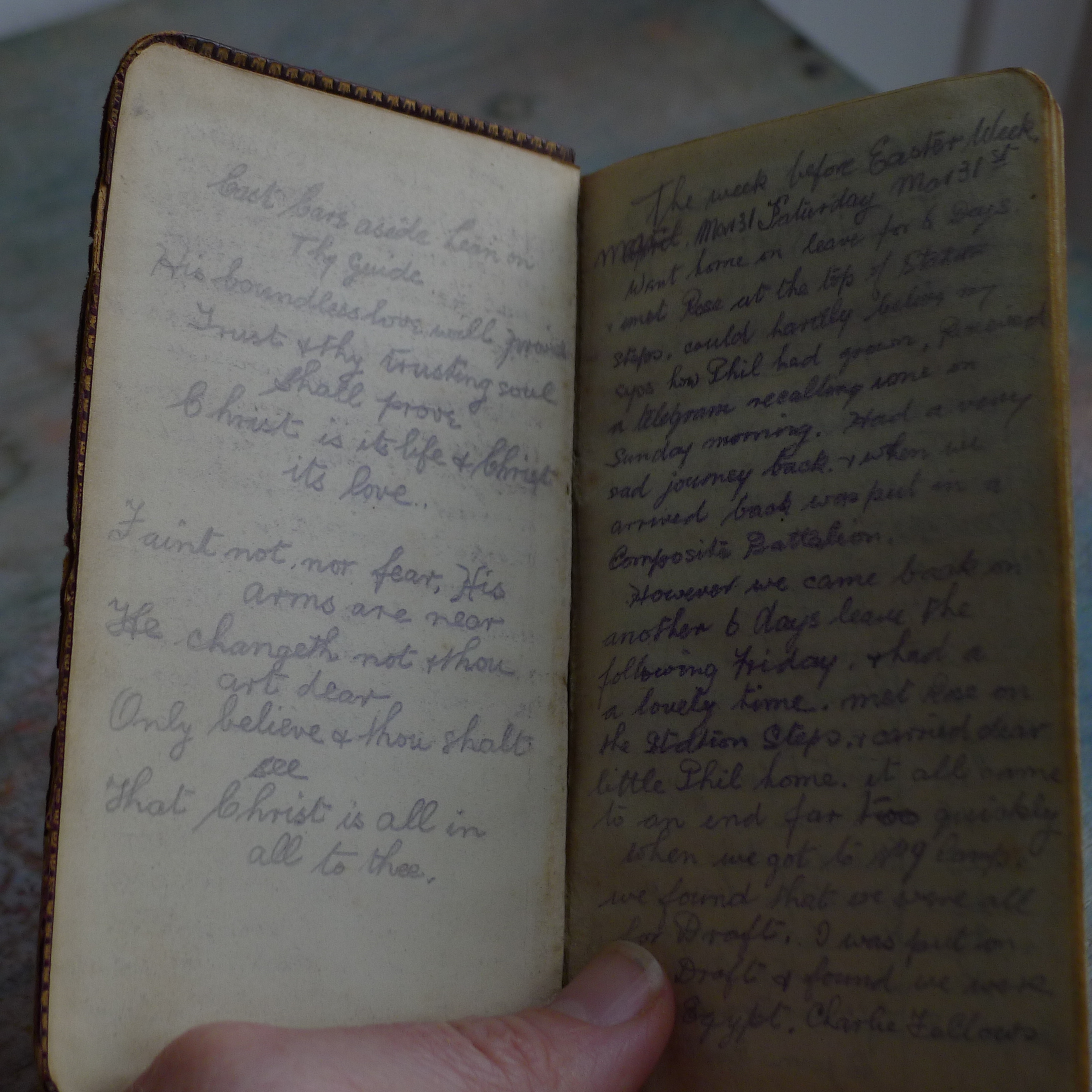 The following day, Friday 2nd November back in London at the Foreign office, Arthur James Balfour was penning a letter to the Rothschild family which promised official British support for Zionist aspirations to create a national home for Jews in Palestine; the letter which later became known as the Balfour Declaration.

Wednesday November 7th 1917: No water again. Convoy and all rations lost somewhere and no wonder. Heavy artillery fire 5am and then a big barrage in the afternoon. The Turks on the retreat. Wild excitement.

I read how he marches through the Palestinian cities of Hebron and Bethlehem and arrives in Jerusalem on the day the Ottomans surrendered the city and two days before General Allenby’s triumphant entry into the city. Despite the diary’s record of the difficulties of the mission and hardships of army life my great-grandfather still managed to take joy in being in the Holy Land.

9th December 1917: “What a privilege to be able to march from Bethlehem to Jerusalem on the 2nd Sunday of Advent. The folks crowded the streets of Bethlehem, but we were nearly the first in Jerusalem and all quiet except for bombs exploding and machine gun fire.”

Two days later on the 11th December General Edmund Allenby entered the Old city of Jerusalem. The British Prime Minister David Lloyd George, having seen his army suffer a terrible year of struggles in the Great War sees this as a morale boost for the British Empire and calls it a “Christmas present for the British people.”[2]

Reflecting on Britain’s actions: the way it made Zionists a promise that Jews could settle in Palestine and yet failed to protect the rights of its indigenous Arab population, the way it captured Jerusalem and later took on rule of Palestine as part of the British empire for 28 years, added to the fact that my own family and not just my nation links me back to these events, this all leaves me feeling both guilt and some sense of responsibility. I acknowledge that not everyone draws the same conclusions from these historic facts, and yet surely, at the very least in this historic year, we all owe the situation some extra thought.

While Teresa May and her government has refused to issue an apology for the Balfour Declaration of 1917, this does not mean that we, as British people cannot acknowledge the pain our country caused, whether we feel a personal sense of responsibility for this or not.

My own story is that I went to Palestine this year to bear witness to the struggles and suffering of everyday people living under occupation. I went because I thought it was important to sit, often in the living rooms of Palestinians like Omah, to listen to tales of how people are surviving in a world lacking so many of the basic freedoms we in the UK take for granted. But I also found myself in the homes of Israelis, listening to those who are working for peace and reconciliation, and those who aren’t, some who admitted they are too scared or unsure of how to do so, others who said they had no desire to. They all had a story to tell, the challenge often was to be ready to hear what they had to say.

Colonialism, military occupation, refugees, terrorism, lack of freedom and basic human rights, loss of loved ones, all these things and more fill the land, lives and memories of those I met in Palestine and Israel this year. It is a land which has a desperate need for both healing and justice. In all the many conflicted feelings held about these people and this land, can’t we, those of us who are British and want to live with integrity and compassion, reflect on 1917 this year and remember that great healing is found when we offer to listen and acknowledge past wrongs? And I remember again people like Omah Amarah and wonder in turn to myself: is it possible for a nation to ask to be forgiven?

[2]Revisiting the British Conquest of Jerusalem.